Folks, I’m not joking. I really did buy into My Millionaire Mentor, knowing full well it was likely going to be a scam program and my goal was to actually prove it (which I will in this review).

Quick Report on My Millionaire Mentor:

Creator: Well I don’t know but it doesn’t matter and I’ll explain why.

Access to an application followed by a series of steps leading me down a familiar scam I’ve exposed SO many times.

This is a scam because it’s just another MTTB “back door” sales funnel and you’re about to see why that’s even worse.

My Millionaire Mentor in a nutshell:

Many times already I have exposed a program known as MTTB. It is a (in my opinion) a pyramid scheme whose promoters (affiliates) have recently gone through some really shady approaches to keep promoting it, one of which is done within My Millionaire Mentor in my opinion.

Here’s what they do:

They set up a website and a fake program name that promises riches. Then they just have you pay whatever they’re charging (in this case $97) to access MTTB through them.

Then if someone goes through that funnel and pays into the MTTB system, namely on it’s costly upsells of $2,000, the promoter gets a big commission. And the $2,000 up-sell is just the start because MTTB leads into MOBE which has even more expensive up-sells.

That is exactly what “My Millionaire Mentor” is. It is nothing more than a redirect into MTTB. And above all else, here’s the more important thing in this review: 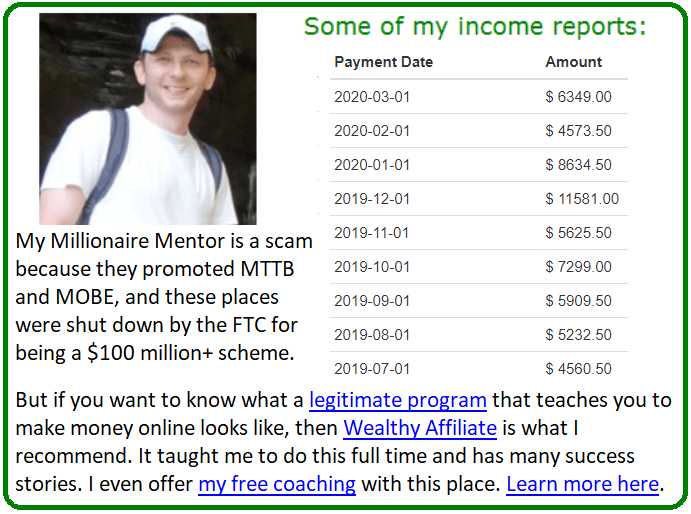 I’ll provided a link above to explain the shut down that occurred with the FTC. But for the continuation of this review, let’s momentarily forget the name of this program, and just associate it with MTTB because that’s where it’s being led to.

Now I don’t know if the creator of MTTB is telling his affiliates to do this, nor am I going to speculate on this, but this isn’t the first time I’ve run into a site like this.

The last time I crossed this same exact scam funnel was when I reviewed Countdown to Profits and guess what?

There is no product, it is just a redirect back into the main program.

The formula being run here is what I call the “back door method” which I defined very specifically in my review of Countdown to Profits, but shortly put, it’s just a way to mask a controversial/scam program by promoting IT through another program that’s posing as a legitimate one, but it’s fake.

People enter the fake program, but in reality, they are just funneled into the main scam program.

Make sense? If not, here’s a brief overview:

Why? Why do they go through all this trouble?

Because MTTB will (well would since it’s shut down now) pay people A LOT to promote it, it’s as simple as that. Forget ethics, forget decency, money is the only thing that’s driving people to make fake redirect programs like My Millionaire Mentor.

Now one thing that is true (subjectively speaking…) is that you technically do get access to a program that does have you learning from an actual millionaire, named Matt Lloyd on how to make money with his program, MTTB, but…

There are 4 things I want you to know:

1) Just because the name is relevant to the program being promoted doesn’t make it a legitimate program. Ex: Countdown to Profits also used the same formula. It doesn’t matter. In my honest opinion, I advise against this program.

2) Normally, if you join MTTB DIRECTLY, it’s $49 the last time I looked, and I paid $97 here to access it through the fake site (My Millionaire Mentor). In other words, I overpaid and got scammed.

That’s OK though. But here is proof I paid + what I saw post purchase: 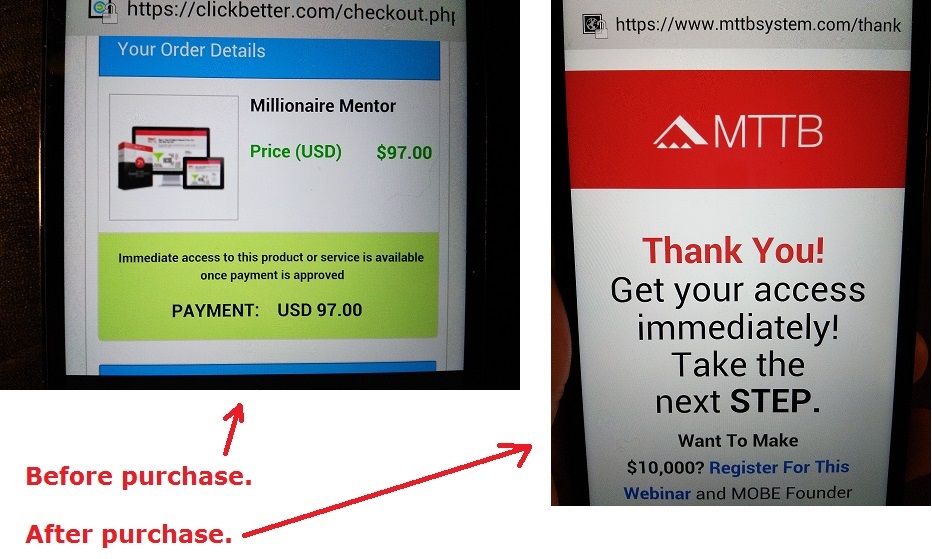 So if there’s any question that this leads to MTTB, these screenshots above should squelch that skepticism. And again, SO many programs like My Millionaire Mentor did this (I say did because again, MTTB is down and so is MOBE, because of the FTC).

3) MTTB itself is a highly questionable program (some say it’s a pyramid scheme and I agree) even if I try to look at it as optimistically as possible. I cannot think of anyway to justify buying nor recommending it to anyone, and I don’t care how much it would pay me per sale. There are so many other, good and ethical ways to do business online and in my opinion, this is NOT one of them.

4) Obviously, you already know where I’m going with this review, but if you’re wondering about legit programs that you can look into instead, let me help you there…

When I said I went far to prove it, I meant it, here’s what went down:

All of this took quite some time and all while I could have technically already done this review without it, but folks, there is a strong principal I follow about programs and that I have to have no doubt it is a scam before I call it out and I urge everyone to follow the same thing so should you run into a program that you are worried about buying, hold off on that part, and let me know about it here.

I’ll let you know what I think about it and then we can move forward. I literally buy this stuff to prove it. And often times I lose money, but should you fall into this problem, know that there is a way out of it and this is it.

0 stars out of 10. Total scam in my opinion promoting another one.

Because the promotion My Millionaire Mentor was pushing is now gone, there’s no point in worrying about this anymore, but you should be careful of other similar high ticket scams lurking about the internet. Either way, I am going to help you avoid this and the other schemes out there, by simply recommend this:

But back to the other program, personally, I very much dislike having to re-review the same program because no matter what, it’s still the same one, just with a new name on top of it.

Then I usually have to go through the refund requests, ect…, but despite that stuff, I don’t mind it. I hope people can hear about the way these scams operate and know how to stay away from them. 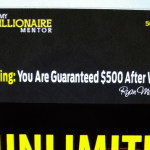 This program is a scam. Here is a legitimate program that is not.
Click here to test drive Wealthy Affiliate risk free and get your bonuses (no CC required)

11 thoughts on “My Millionaire Mentor Review. How I Proved It’s a Scam.”