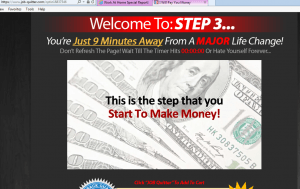 Price: $49 but what they don’t tell you is that there are more prices, more packages and more things to pay for if you wish to learn more from the system (which runs by a completely different name: MOBE).

Well here we go again, it’s another program pitching MOBE and it’s doing it in a sleazy way, giving it a bad name in the process. I’m going to tell you what they don’t and you need to know about this whole program before you join.

So what’s the Job Quitter System? Is it a scam?

So there are a ton of work at home programs around the internet these days, all of which pitch a single program which is called MOBE. That is what the Job Quitter System is, it is a promoter of MOBE, and not it’s own program.

Their goal is to get you in that program and have you spend big money inside there, and when you do, they make a big commission. While this also enables YOU to become a MOBE affiliate and promote it too, it always starts with spending a lot of money and there is always risk that you may not make it back.

Once you’re in, there are coaches to contact which will take you through the sales funnels there and try to get you to upgrade your membership. This will cost several $1,000 at first and then go higher if you keep going. And this is what you need to know is up.

Can you make money with the system? Well not anymore, since MOBE is gone.

How the marketing in Job Quitter System deceives you:

After having seen who knows how many sales pages operate like the Job Quitter System’s does, I have come to recognize when it’s going to promote me something I won’t want to buy. Specifically, here are things Richard Harper says that are not true:

He says he doesn’t need your money (this is false): 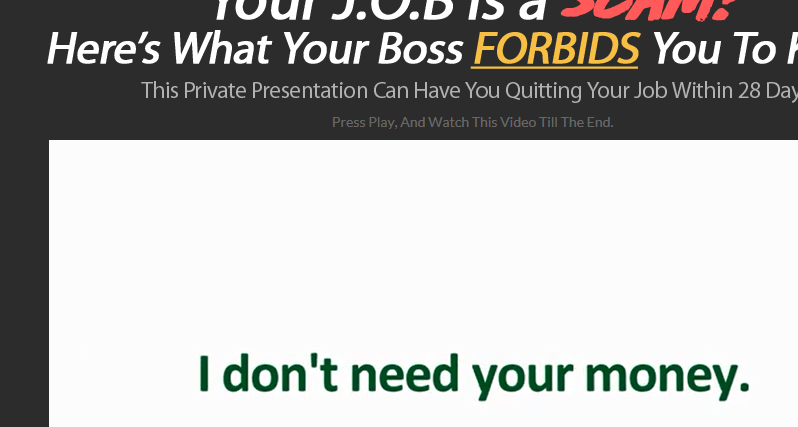 That is false since you do have to pay $49 and I have already said how the compensation works once you get into the MOBE program (you spend more money = Richard getting more commissions, so trust me, he does need your money).

He says you don’t need much, just a few min to make this work (again, false): 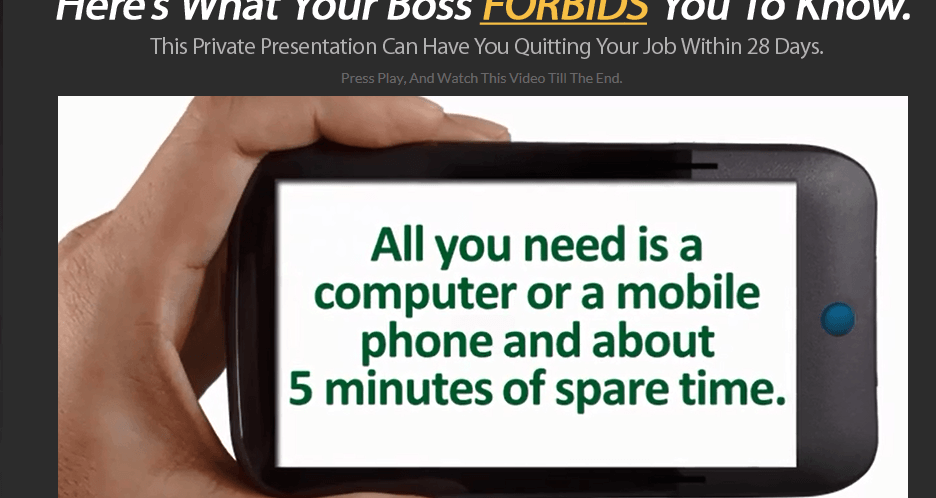 This is also false. But to be fair, he does say “his” system is not a get rich quick scheme. That is probably one of the only honest things about the sales page, but the impression he makes with the screenshot I put above is false nonetheless.

This is also false because it isn’t his system to begin with, he’s referring you into MOBE and the coaches there then take you through it and try to get you to buy other things which exceed that $1,497. So that number was made up in my opinion.

And the idea that he’s giving away what I have said isn’t his system for a small price is just a trick to get you in. Remember, you WILL go through the real program and WILL be pitched higher up-sell offers.

And there’s probably more points I could list, but I’d say, these are enough…

Imagine if the marketing was honest, it would sound like this:

Imagine what would happen if Richard was honest here and told you straight up that joining “his” Job Quitter System involved getting into another program, then paying a lot of money. Would you join then? Probably not.

Now if he were to rephrase that and say the cost is $49, then it’s easy to make money, as well as the original system costing way more, would you get in then? Probably yes.

And I am writing this to make a point on how the marketing is used against you here and how the latter way you are being sold into this program is a trick to get you in. I wish he was at least honest. I’ve rated other programs which promote MOBE honestly, more fairly and gave them credit for the honesty, but Richard’s program is not one of them. Whether or not you want to call the way it’s marketed a scam is up to you, but I gave you my position…

And another major, negative point:

I really dislike the frame in which Richard sets up his sales angle, the frame of your boss being your enemy, not wanting you to know the secrets to being independent, how he was the same (he tells his story), how his system has helped people escape that lifestyle and live the life (while showing pictures of cars, houses and conveniently NOT showing himself with them by the way, think about that for a moment), and how he’s your friend who will save you and how you’re getting a great deal if you join today.

This kind of sales page is one you need to be watch out for.

0 out of 10 stars. If the guy was honest about his sales pitches, I would have given it a higher rating, but I absolutely detest when people leave the BIG, important details like actual prices and what to expect out of their sales pages and give a completely different and deceptive viewpoint!

In the past few months, I must have run into 10 programs or more that are like Job Quitter System and yes, all of them are pitching MOBE. With the exception of 1 or possibly 2 that do it honestly, the rest (and yes, Job Quitter System is on the majority side here) pitch it the deceptive way I detailed above and I absolutely disapprove of that.

I highly doubt that most people can afford the prices within the MOBE program and while there are a lot who can enter for $49, I can tell you right now that this provides limited training, which I have gone through and can claim.

Most of what you learn is lessons which talk about creating a big income through selling high ticket programs and this soon leads into your first, $2,000 up-sell, so keep that in mind if you think you want to try the $49 start up cost.

Where you get more value (for free):

I can tell you right now that the #1 recommendation I provide as an alternative to Job Quitter System truly offers way more value, for a price that is unbeatable: Free. Here’s why:

So there is the most broad, yet descriptive comparison. I’d also like to add that with my #1 recommendation, we don’t do any deceptive nonsense, so you’re going to love it there.

With every company I’ve reviewed that did the things I didn’t like in it’s marketing like the Job Quitter System, I have always recommended my alternative, every time, because it really is better in my opinion and the success stories I have, prove it. 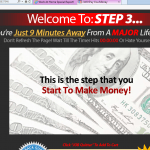 Anything that promoted MOBE was a scam, because MOBE was a scam itself. Here is the program that is I can tell you is legitimate.
Click here to test drive Wealthy Affiliate risk free and get your bonuses (no CC required)