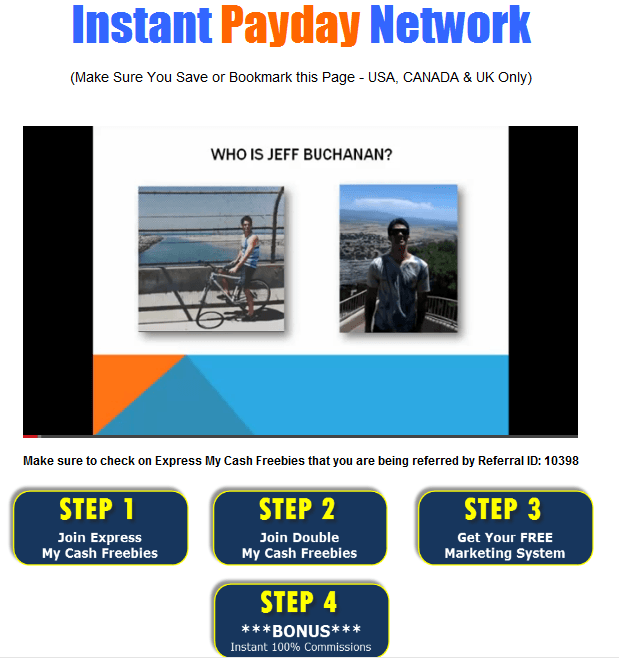 It’s hard to get an honest review of Instant Payday Network and if it’s really a scam or not, but this is one of the only places where you’ll actually get it.

If you’ve been reading my blog for sometime, you know how extremely skeptical and critical I am of programs which promise quick money.

With so many places promising big, but delivering zilch, now more than ever you need to be alert and do proper research before making a final decision on these programs and this is one of the sites that does provide an honest insight.

In fact if you look at most of my product reviews, I put them into the “Avoid these places” section.

So did Instant Payday Network land there?

The answer is yes and I’ll explain exactly why, but first: 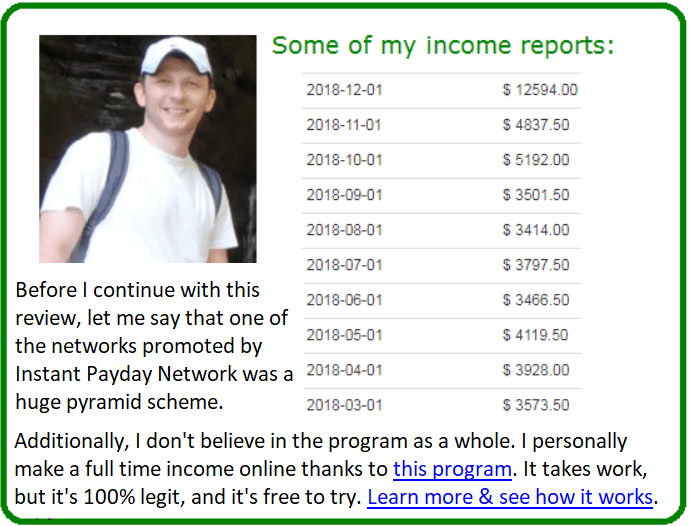 What is Instant Payday Network?

I believe it’s one HUGE referral site where the owner, Jeff Buchanan gets people to join a number of different places and gets money as a result if they sign up or invest money. Now the places you or his referrals join will actually pay you money for 2 things:

In other words, what Jeff gets you to do is what you’ll be essentially doing to make money: He refers you to these companies. 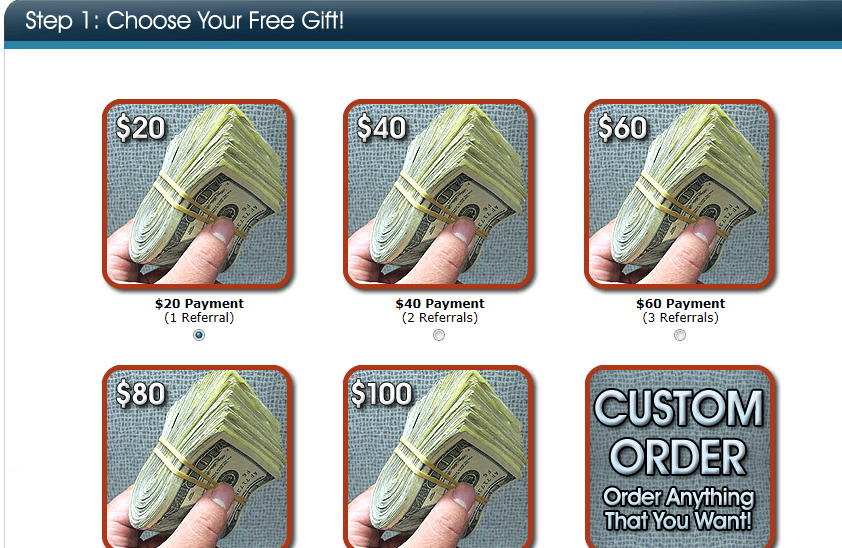 You’ll have to refer others into it.

And honestly, I have no problem with this as I do it too through a method called affiliate marketing.

But here’s the problem:

From what I’ve heard based on extensive research is that you won’t get paid much for testing out the products and it’s certainly NOT a sustainable way to make money so in order to make anything out of this program, you’ll have to basically refer people into it.

That’s where the real money is at (see image to the right), though I personally find it an illegitimate approach and here’s why:

While I can’t vouch for all of the products Jeff asks you to sign up to, one instantly caught my attention: Empower Network. This program is one of the worst rated products on this website.

Update: It’s the one I said was an MLM pyramid scheme and is no longer active.

There are many who love it, but a growing number who don’t. I personally believe this program to be a massive pyramid scheme. 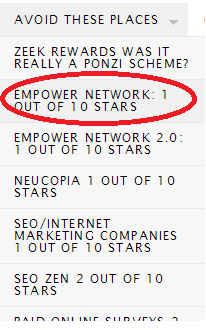 Though I won’t get into details and you can find them on my official Empower Network review page, what you need to know is that this program provides a lot of smoke and mirrors to get you to sign up and then funnels you through a massive upsell tsunami to the tune of $5,000+.

In order to make money through this program (which promises 100% commissions), you need to actually purchase some/all of the expensive products there which total to the $5,000. You do get video training on how to promote the program to others, but aside from that, pretty much nothing else.

Then and only then can you make the 100% commissions. This is why I label is a pyramid scheme. In fact, less than 1% of Empower Network members make money. I know I said I wouldn’t get into details, but believe me, it’s pretty ridiculous once you start uncovering this program.

That’s actually one of the 4 Steps Jeff funnels you through. Empower Network is the last one (Step 4), but the others I want to go over and explain the reality of making money with them…

The first 2 programs (steps) Jeff asks you to sign up to:

Are basically signs up to the Fortune 500 companies. With all the popularity of Instant Payday Network, people are flocking to the

site, signing up to these programs and Jeff is making a killing through this because they are his referrals.

Using a special keyword tool, I saw that over 4,000 people are looking up the phrase “Instant Payday Network” every month.

Just imagine how many of those people visiting the site sign up. In fact on the second step sign up, Jeff asks you to make sure his referral ID is properly shown.

While I don’t mind being referred somewhere, I want to be absolutely sure what I’m buying is:

In the case of these 2 products, you do legitimately test out products for Fortune 500 companies. But there are cons (below).

This is basically a training guide on how to promote:

Instant Payday Network to others. As far as I know they have their own affiliate program which would explain why so many websites are “praising it”. Be careful.

2 out of 10 stars: Just a massive referral funnel site. No actual product (just training to refer others). You can make money, but I consider it illegitimate and I recommend staying FAR away from Empower Network. See #1 ranked program which is Wealthy Affiliate.

I would be VERY careful with this kind of stuff.

Even if you just want to try the Fortune 500 companies and test their products, you’re likely going to be emailed a lot and the products you try won’t likely lead to high payouts (at least from what I’ve heard). Even though I’ve never tried this kind of stuff, it feels something like paid survey sites, which in my experience didn’t yield a lot of success.

My personal opinion is that this is just a major referral site. Jeff has created a buzz with the words “Instant” & “Payday”, but in reality just made a site that doesn’t really sell any product, just refers people to other places for which Jeff will make money on.

As I said before I can’t speak for the Fortune 500 companies, but the fact that he recommends Empower Network is a MAJOR red flag to me. I rated this product low because:

Most people who get into this business, even with Jeff’s training will not be able to refer a lot of people (if any) into the system. Thus the lack of sustainable income argument. I’ve seen it time and time again. People pay to promote something, but because they don’t really know how, they will be lucky to even get 1 person there and that person will likely not be happy either…

In the end the choice is yours. But in all honesty, if you’re looking to start an online business or make extra money online, Instant Payday Network is not what I would recommend. If you have questions or want to prove me wrong on this, by all means, I’d love to hear your thoughts on this. 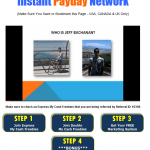 It may refer people to good companies, but Empower Network is a bad choice. Here is a program that you can get amazing training from to learn to make a profitable, personal business website.
Click here to test drive Wealthy Affiliate risk free and get your bonuses (no CC required)

3 thoughts on “Is Instant Payday Network a Scam? My Honest Review.”