Name: Instant Income From Home by an unknown person, but it’s usually a fake anyway.

Price: $97 into higher and higher upsells.

I had already experienced what this scam before, but it was via a different name. In any case, it’s all part of the same sales funnel I have come to REALLY dislike.

What is Instant Income From Home and why is it a scam?

I think the best way to describe it is that it’s a VERY fake news site that reports deceptively on work at home opportunities, makes you believe they have an easy system and then leads you into another scam (example of a fake work at home site).

Now that OTHER scam is what I have experience with. It is called Automated Daily Income and in the past month or so, I’ve been running into that program again and again through places like the program I am reviewing now.

Basically, I’ll spot sites like this online, click on them and be directed into Automated Daily Income.

This scam funnel has happened so often that I called it even before I saw it:

I’ve become so used to seeing this already that when I first came across Instant Income From Home, I though to myself “Hmm, watch this lead into Automated Daily Income” and guess what? It did.

And this is because I’ve already had this experience so many times before that it’s just expected at this point. But my job has always been to unveil scams like this. The good news is that this time, I didn’t pay into the program. Once I saw it was leading into Automated Daily Income, that was it for me…

So what’s bad about this program anyway?

I’m being awfully critical of this Automated Daily Income and you may be wondering why. Well I owe you an explanation and here’s the story:

The biggest problem I have with it is 3 things:

2. Automated Daily Income adds even more upsell packages on top of the first reason I just posted. So not only are they secretly getting me into a program I didn’t know about until later, but they are also trying to squeeze out even more before I even step foot into MOBE. That just angered me a lot…

3. And finally, the whole way this stuff is marketed is one lie after another.

-You start with Instant Income From Home.

-Get redirected to Automated Daily Income.

-And then get redirected into MOBE.

-And throughout this funnel, you’re pitched get rich quick mindsets which is a lie in general, all while spending money and being asked to spend more.

-You’re lied to as to who made the Instant Income From Home (and Automated Daily Income) as they hide behind FAKE personas such as single moms to make you feel for them.

-And their sales pages on their own, in general and as I’ve said MANY times already lie to you by…

-Copying fake stories of single moms making money again and again (they aren’t even original, they are literally duplicated on these sites over and over).

-Showing you fake, and recycled testimonials that don’t apply to the program.

-Making you think it’s only $97 when it’s really more.

-They slap together past news reports of people making money to try and connect it somehow to their fake program. So it’s like a form of using honest videos, but putting it on a fake site to make people think the fake site is real.

And there’s more stuff, but why bother at this point, I think you already have enough conclusive evidence to see why I dislike this whole program and on top of everything, again, I actually purchased it before so I know what there is to expect…

This formula has been used and will continue to be used to trick people.

If this is your first time encountering a “programs” like Instant Income From Home, then know it’s not uncommon to see this type of stuff. I don’t know at what rate these fake sites pop up, but it’s usually related to how many people spot the scam, report it, which causes them to vanish and then re-pop up and/or if people like me report on it early, which causes the sales of the people behind these sites to slump, thus causing them to just do it all over again.

But in any case, the short answer is:

It happens a lot and it tricks a lot of people, but luckily a lot less now than it used to because the internet is moving in a direction where sites like these are become better known through blogs like mine and other people who report on them.

But in any case, now that you know about this formula, should you spot it again (and I’m sure you will because it’s common to spot if you look for work at home opportunities), you’ll at least know that if the next one you find looks like these places, then you’ll know to stay away.

0 out of 10 stars. My reviews of these programs always reflect the site that’s using these dirty tactics to make sales and in this case, the score is in regards to Instant Income From Home and Automated Daily Income.

My final thoughts: Legit alternatives are around and here is one:

It’s much easier to find low quality, scam programs online, than it is to find a good program, especially when you’re looking for a work at home opportunity, but I’ve done the research and here is the best option:

Without a doubt, that’s the best recommended program I have found throughout all these years. Everything you need to know about how it works is right in the link.

Now that you know that, also do know that I will continue to expose programs like Instant Income From Home, regardless of whether or not they lead into the same program or another. As long as it’s done the way it currently is and/or it leads to bad/expensive programs, I’ll call it out and let you know.

$97 and into scarier upsells 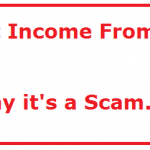 Instant Income From Home is one scam program promotion after another. Let me show you what program really works here.

4 thoughts on “Is Instant Income From Home a Scam? Oh, Yes!”