In an effort to expose the multitude of scam programs on the internet, I was doing research about current work at home jobs and opportunities and stumbled across this one: Computer Team by a Julie Clark.

Now this is not some sort of PC repair program or physical business, as there are legitimate places that are also called Computer Team. No, in this case, it’s a program that provides training services to show you how to make money online and based on the sales page claims, it’s supposed to be easy. But is it? And is it legit?

Well I’ll tell you this much: It is 100% NOT recommended and I’ll explain why.

Price: $97 with it’s own line of up-sells afterwards. 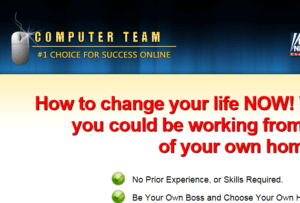 Creator: Julie Clark who I have (and will again) prove isn’t real.

How it works: The sales page claims you can make easy money, anytime with their system by placing links across different sites and networks. Realistically though, this is not the whole story and it’s certainly not that easy. This lack of honest information and what I found on the back end of the program, made me give this program a big zero.

In my line of work (which is partially about reviewing scam programs), what this program teaching you to do is classified and known as a link posting scam, meaning what they teach lacks the real training to make this strategy work.

Do I have a different/better recommendation? Yes:

So let me go over why Computer Team gets such a low rating:

First of all, I want to explain that there’s NUMEROUS fake news websites on the internet that push these types of programs on people. Now these aren’t the same fake news sites you hear about in the actual news media which discuss politics and world events.

These are fake news websites that pitch work at home programs and a perfect example of that is this very program I am reviewing before you today. Just yesterday, I was reviewing another program that had the same exact creator’s name and picture behind it (Julie Clark). It was called Navigate The Web. By the way in that article, I detail with proof why Julie Clark isn’t real. Not there and not in this program either.

And here’s what’s funny, this program and Navigate The Web, don’t just have the same exact fake creator behind it, but the sales page, including the claims, the video you see, the “as seen on”, it’s ALL the same. In other words, 2 exact same websites, but with different titles:

1) Julie Clark is admitted to being a fake persona as well as the picture they show, is cited as not being authentic 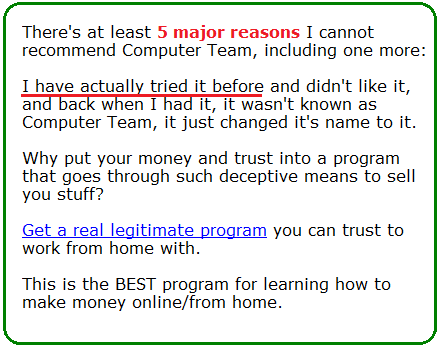 (these are straight up facts coming right from the site itself!).

2) There is an actual news report video at the very top of the site which talks about moms making money from home, but this report is in NO way tied to the program. In fact, if you look at the video, not once do they mention the program’s name, nor Julie Clark’s name, it’s just an arbitrary news report to make you think that making money from home is possible by showing you a legit video, and then pitching their bad program to you to make you think it’s inked together.

3) Additionally, they also use icons of famous news and TV networks to again, in the same way they used the legit news report, to use these icons to make you think it’s all legit and tied together. Again, the fact of the matter is that it’s not and once again, their own disclaimer page reveals this (they mention having no ties to these networks or being endorsed by them).

4) Consider an another fact that there’s many other fake news websites pitching this very same program. In fact, I have a few of them bookmarked for personal reference in case I ever need to see what new scam or low quality program they are pushing and most of the ones I’ve looked at again and again are all pushing this new “Computer Team” program.

5) Another bad thing to consider is that again, the duplicate pages. Computer Team, Navigate The Web and at least another program that I will be reviewing tomorrow are all the same and behind these programs is another, hidden one not being revealed. These acts of mystery and hiding the truth are really a deal breaker for me to recommend the program to you…

But Vitaliy, don’t websites promote the same program all the time?

The last con I listed may get some confusion. It is in fact true that there’s tons of blogs, all run by different people who pitch the same programs and products.

Whenever you look up a review of a product, you’re bound to find countless blogs and sites reviewing it. They’re all pitching the same thing, so what makes this formula I’m criticizing in Computer Team bad? Well here’s a list of great reasons why there’s a big difference between legit sites recommending a product and illegitimate ones:

Admittedly I too promote the same program/s (not Computer Team!) on one or more of my websites, but my intent while trying to make money isn’t to make it through illegitimate means…

0 out of 10 stars. Programs which rely on faking themselves, their marketing and efforts to make sales to these levels are 100% NOT recommended.

My final thoughts: What to do if you’re looking to find legit options.

As a person who once looked through many different work at home programs to see what works, I did find a good one, and while you can get it here, let me ask you to pause clicking that link for just a second and explain something very important…

Earlier I had explained that what Computer Team was saying about how they’ll teach you to make money by posting links was explained very broadly and it would be difficult to pull off. Well as someone who does link posting, allow me to fill in the blanks and explain how this business works…

Now it’s tough to do this if you try to make it happen through bad programs like the one I’ve just finished reviewing. You need legit programs to teach you this stuff and the program I recommend does this.

I’ve been doing affiliate marketing and link posting for years. You’ll find tons of links scattered across my blogs here which point to different programs and products, for which I get paid for and I do make good money doing this:

If you want to try and do the same, check out my review of the same program I just provided a link to. I’ll provide you with specific examples (more thorough stuff) on how this all works and how you can do this too.

I thought about writing a separate article but decided to just update this one. Basically this is what the program name has switched to since the last time and everything I wrote in this article still is the same for this “new” fake program. The only difference is that it’s made by a “Lynn Allen” and yes it’s just another alias of Julie Clark. 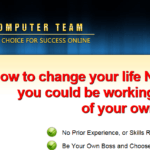 See my legit alternative (10 out of 10).
Click here to test drive Wealthy Affiliate risk free and get your bonuses (no CC required)

4 thoughts on “Is Computer Team a Scam? What You Need to Know!”