After purchasing Clone my Sites, I discovered it was basically a replica of an old scam program I reviewed. I will show you the members area and expose the catch.

Quick report on Clone my Sites:

Price: Over $30 with minor and major up-sells after you join up.

Some of them are sneaky, others are back handed. And it’s because of everything I saw that I gave this program the following rating:

YES, this program is a total scam.

Not only will I reveal why, but I will also explain how to never fall for this type of stuff again and an even better thing I will do is give you a legitimate system… 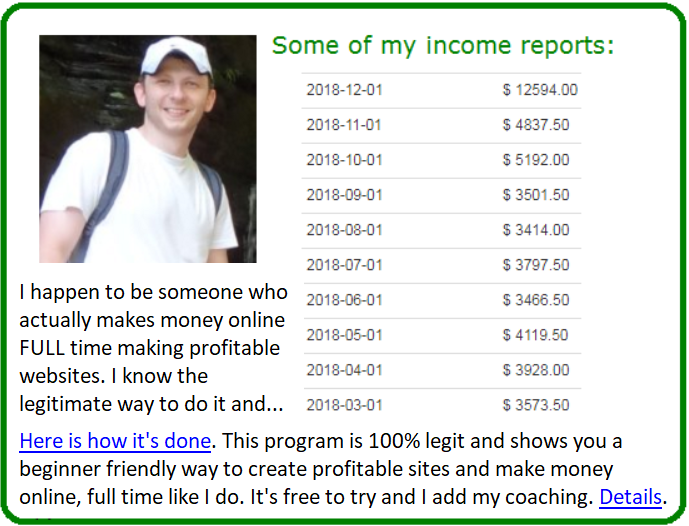 Exposing the scam of the Clone my Sites program:

Here is what it is & how it works:

So I have a ton of experience to share with you regarding this program all the way starting from the sales page to the actual program itself which I did buy and had to complain about to get a refund for after (because it was horrible).

Firstly, we have the red flags of Clone my Site’s sales page:

These red flags are important because if you see these on ANY kind of make money system, it is almost 100% surely a scam. Let me dissect these flags in this particular system:

Basically the way it works is that you land on the page and get a video of a guy named Jake (who never reveals his face by the way) saying that he has some special site he can make for you in moments that’ll make you money. He has before and after pictures of no sales coming in, to tons coming in once you use Jake’s system.

How it works, what’s going on, isn’t actually revealed, but he basically sells you the idea that you can get your hands on this system for only $37.

So in this regard, we have numerous red flags that should stop you from going forward:

2) He isn’t actually describing how his system actually works. Don’t worry I will since I tried it and I can help you succeed at this business. Read more here.

3) There is a “magic” system being pitched to you in that if you just spend a little bit of money, then you’ll have this system making you automatic money. This takes away your rational though and makes you think that spending a little to get a lot quickly, is well worth the investment.

This is nothing more than a shiny object trick.

4) They show reports of people “making money” with this system underneath the sales video, which I assure you are 100% fake.

I’m telling you guys, it is EASY to replicate this kind of fake testimonial scam and you really need to watch out for overly simplistic testimonials like these. So overall:

When you look at these red flags (and there’s a good reason to keep them in mind, it’s protecting your money), then you won’t see these sales pitches in the way the creators want you to see and that’s a good thing!

So what exactly happens when you buy Clone my Sites? Here’s what happened to me:

Firstly, Jake never reveals himself. In fact, I still don’t know the face of the person or people who made this program, but hey, I knew it was a red flag to begin with…

Next, there is no special site, you actually have to buy it as an extra feature. You see what happens is that once you join, you are transferred to an up-sell to buy the site AND hosting which costs you extra money monthly.

You get the option to select the name of a site you wish to make, but the hosting part is where the extra charges come in and though I didn’t buy the site/hosting, I do know from experience that these things are duplicated sites that have less chances of succeeding than you can imagine.

Third, the members area of Clone my Sites isn’t actually what the name of the members area is. It’s actually a different named program you’re transferred into once you buy Clone My Sites and it’s called Profit With Our Sites. There’s some extra trickery to add to the red flags by the way.

But the program you’re transferred into is basically worthless and even more so, will have you spending MORE money to try out the actual system. Here’s how it looks:

You’re going to be shown how to make a squeeze page, which collects emails for your site. But wait a second…if you didn’t buy the site (with the hosting scam I talked about earlier), you’re basically screwed unless you know how to make sites.

Further more, if that’s not enough of a problem, I did just say you need to spend more right? Well the way they have you do this is by spending money on “traffic” which is very expensive to get first of all, and second, 99% of it is cold traffic, meaning none buyers.

And finally, I mentioned earlier how this program is a replica of an old scam program I once tried. Well that program’s name is 12 minute payday.

The bottom line is:

Trying to make this system work is like trying to fix a car blindfolded and without experience on how to actually fix cars.

-Even if you do get a site, you don’t really know how to use it (and it has it’s flaws already). They just give you a broad talk on how to send traffic (which you buy) to your site and make you assume that’s all that there to make money.

-Next, if you don’t know about traffic or how to make it convert, you won’t know how to make this system work in general.

0 out of 10 stars. Consider all the claims and promises that this program pitched to you for $37 and then consider what you actually get (from my experiences with it) and you will then realize why I called this system a scam. This was a bad experience and I had to have several messages back n forth with the “product owner” to get a refund.

Folks, these scams are PLENTIFUL out there and I wanted to give you a section in this review where I detailed the common things they do to make money off you so you’d be prepared to stop that. Believe me, if you keep looking for these types of programs, whilst keeping the red flags I mentioned in mind, you’re going to quickly see them the next time you land on one of those pages and hopefully will not fall for them.

But honestly, I’ve already done all of that research on these sites and programs and which ones you can trust:

Believe me, that’s the program you can trust and I say this not just because it gave me results, but also because I too went through too many scams to figure this out (one of them being the Clone my Sites program I just reviewed). 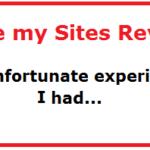 I absolutely do not recommend Clone my Sites. Here is the program that you can trust. See the proof it works here.