To start, I don’t like MLM programs and honestly after looking at 5 Dollar Funnels, my disdain for them grew even further. I’m going to explain why it’s very risky to get into this type of program.

You probably won’t like hearing this, but I believe it’s a pyramid scheme. It also doesn’t pay too well for the first few sales you may make and the only way to earn big is to get a lot of referrals which I believe most people won’t ever get to.

You can sign up to the program for free (only through another referrer or affiliate) which will give you access to the back office after which you are taken into a 5 step sign up process, one of which will be to sign up for their lower most level for $5/month.

After that you will be given a little of bit of training and tips to sign up others to the same funnel. You earn commissions for each sale and the more you make, the more levels are open to you where you can make even more.

Depending on which matrix you are a part of (there are 4), different compensation models are available. The higher up on the matrix you are, the more training and money making opportunity you have, but the higher price you will pay.

4 matrixes are available, with the $5 one being the first. This is called: 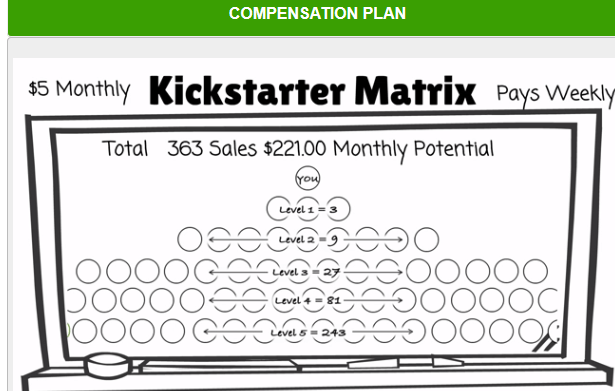 As you can also see, you don’t get paid a lot for referring people in this membership with a sum total of $221.

The first level pays less than a dollar ($0.75) and the only way this can work  to a useful amount is if you at least get to the second level ($18/month earned) in which case your $5 investment is covered. 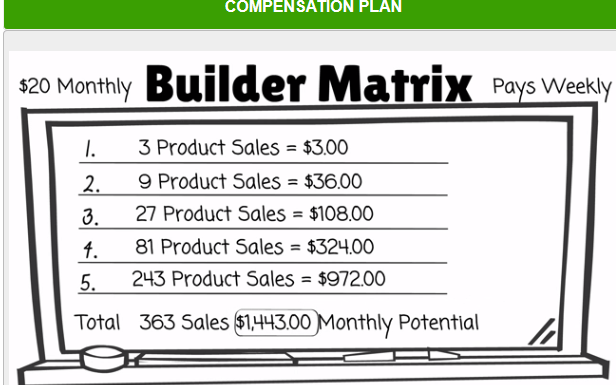 The model works exactly the same way as the Kickstarter before it, but you just get paid more and the overall monthly income is MUCH higher than with a total of $1443 being the most you can make every single month through this matrix as you can see to the right:

If you are also having referrals sign up with the Kickstarter plan, the profits you earn from that matrix continue to accumulate separately and add to your total amount earned so if you’re a part of both these matrices, they’ll add up together.

So there is more opportunity, but more cost to be part of the second matrix. 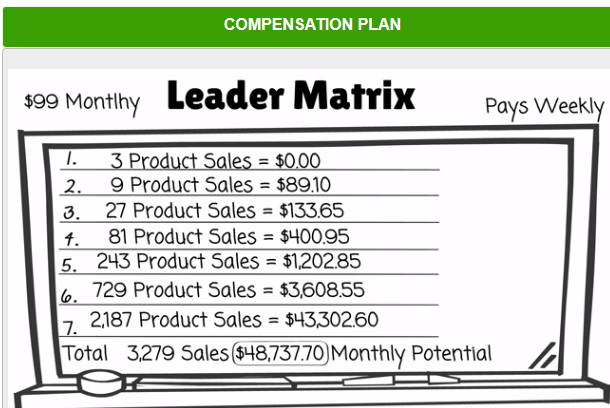 This matrix adds 2 more levels to the MLM with there being a 3 by 7 matrix rather than the 3 by 5 you’ve seen in the previous 2.

The price of being in this level is $99/month and there is more potential to earn more:

Notice that with the first 3 sales you make with this matrix, you won’t earn a penny.

Odds are these sales are passed up so you can only start to earn on the second level. 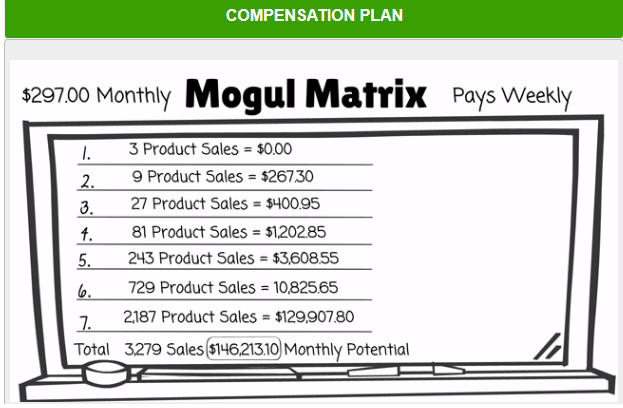 The final matrix is also a 3 by 7 and it is the most profitable in the Five Dollar Funnel system.

This is where the 7 figure annual income is possible (What I really mean is HIGHLY unlikely).

You need to pay $297 every month to be a part of this for starters:

And obviously, like with the other matrix plans, the more you invest to be a member of a higher tier one, the more you’ll pay, but will also increase the odds of your affiliate earnings being higher for each sale.

Mogul is basically the one with the most opportunity.

How much are higher ups and Tom Cellie making with 5 Dollar Funnel?

From what I’ve seen, there is no hierarchy of you passing up sales to other people above you or your referrals. But you make a portion of every person’s investment that you refer into the company.

How much depends on the matrix you’re in and what level is paying out. It can be anywhere from nothing to 1/5 of the total, or 20% commissions each month of every referred member.

The math is pretty simple:

20% commissions are actually not that bad of a deal in most affiliate programs or MLM’s, but that 20% only make a big difference is the amount is huge. If it’s pennies, well then, it’s just not worth it.

So what you need to know is that the bulk of money being spent, whether by you or you referrals to be a part of this system, a large chunk is going to Tom.

Why do I believe it’s a pyramid scheme?

It’s not difficult to make that assumption:

You’re paying to enter an affiliate program (MLM really). Entering one of the 4 levels (or all) entitles you to the benefits of those levels IF you can actually recruit. You CANNOT promote this program until you sign up to one or more levels. Many affiliate programs do NOT charge you to promote them.

The training and education is centered around promoting the system to others. You learn to build a business of recruiting other people, not building something that you may necessarily love.

The whole business and survival of yours and the people you refer is to continue the same pattern.

The kind of education you get from this system in my opinion is a bit overrated and overpriced and you shouldn’t have to pay monthly for it. It is true that you get new training to help you promote the program, but it’s also a way to keep you in the system. And from the things I’ve noticed, there’s FAR better training systems like Wealthy Affiliate out there.

I think most of the money that Five Dollar Funnel is going to make is only going to come from people who just pay into it and won’t be able to make many sales.

Most people who join MLMs will not succeed, but the promise of making SO much is what keeps them hooked on the program and paying money every month which is where I believe most this program’s profits will come from, not really the ability for you to refer others.

2 out of 10 stars. The potential to make a ton of money doesn’t mean it’s going to happen and with MLM programs, this is how they recruit people. Don’t look at the high potential. Look at reality and then you’ll see that this program is just another MLM pyramid scheme and I’d stay away from it.

There is a large crowd out there that loves these types of programs, would call me a lot of names for calling out Five Dollar Funnel and there’s even the type of people who have large followings and they just continually refer them to one or more of these types of pyramid schemes. That’s there whole business set up.

I don’t believe in that approach. I think that’s a form of scamming. So what do I prefer doing?

I prefer actually giving something that works, but at the same time doesn’t involve them bounding people to programs like Five Dollar Funnel and giving them the opportunity to take what I give them and do anything they want with it.

So as an example:

So you see in these 2 scenarios, the latter is what I prefer because that is what makes people happy and you can actually make money doing that if you know what to do. There’s programs like Wealthy Affiliate which teach that and those are the programs I stand behind, not shady make money systems.

I know a lot of people don’t care about how they make money, but really look into the program you’re thinking of joining and ask yourself if you’d be comfortable if someone came up to you and offered this. If you wouldn’t join or something doesn’t feel right, would you feel comfortable reciprocating that and then doing the same to others? 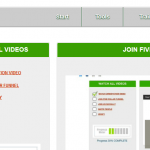 I do not care about opportunity when a program looks exactly like a pyramid scheme. I will stick to programs that are not like this, and Wealthy Affiliate is the one which has brought me success. See why here.
Click here to test drive Wealthy Affiliate risk free and get your bonuses (no CC required)