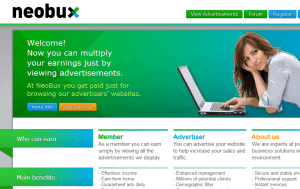 Overall Rating: 2 out of 10 stars (not recommended).

I’ve explored many sites like Neobux so before I joined it, I somewhat knew what to expect.

I don’t feel the site is a scam, but in this post I want to help clarify if it really does work, how practical it will be to make good money with this site and if it’s worth joining. My personal opinion is that it’s a waste of time, although there are some perks.

This is just one of those rewards type sites (like Inbox dollars) which pays you a certain amount to do various things from clicking on ads, playing games, installing apps to your phone, trying out different offers (some of which cost money).

By participating and trying out the offers provided, you can earn points which are then redeemable for money. You can also refer people into the program and make a commission in the process.

Overall the site has many different things to try and earn points with, but in many cases, the easiest tasks (just clicking on an ad) pay you very little, while others which earn you a lot of points usually require downloading and/or following specific steps which may include purchasing something. In short, neither option in my opinion is worth it, but let’s get into details to show you what I mean…

Inside the Neobux program:

Signing up to Neobux was very simple and navigation through the site is also straight forward. That’s probably one of the few good things I managed to find. Here is a screenshot of the members area: 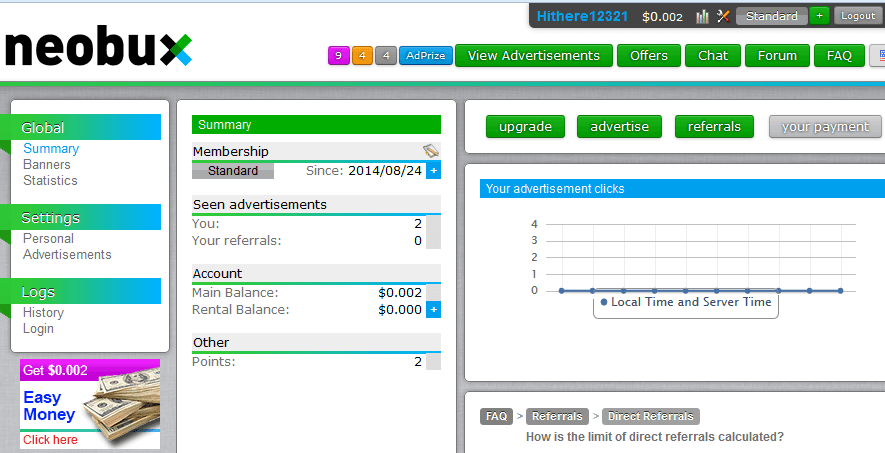 I tried some of their offers to get an idea of what the site was like. But this unfortunately only proved what I already believed prior to joining Neobux: That’s it’s really not worth it. Here’s what I mean:

Earning money with Neobux (how it works):

From what I have seen, the easiest ways to earn “money” with this site is to just click on certain ads which appear daily. Now I did quote the word money because you only earn $0.001 for each ad you click.

That’s a tenth of a penny (reminds me of paid online surveys) which doesn’t even count as money as far as I’m concerned. There were about 10-15 offers on one of the pages which featured these ads and they all paid this little. Again here is another screenshot: 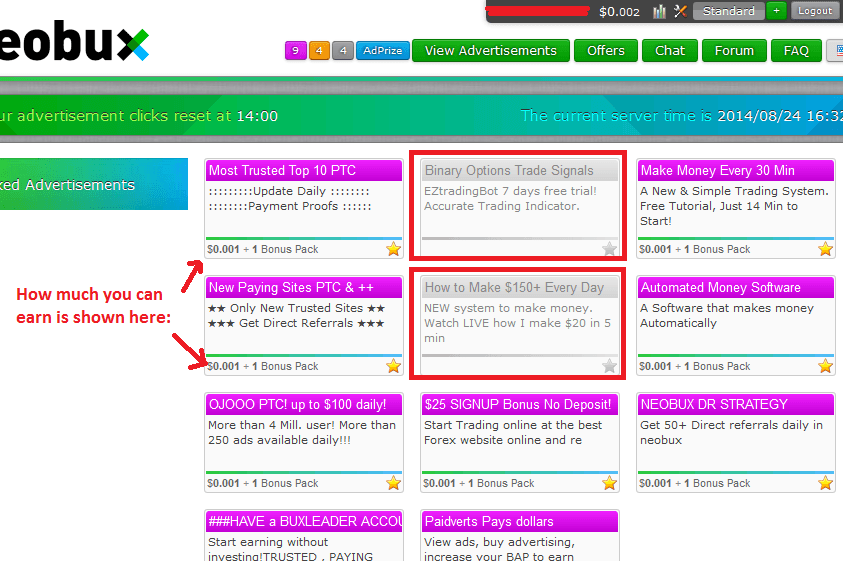 I can understand why they pay very little for this. After all, the only thing required to earn points here is to just click on the ad. But at the same time, would you really want to spend time clicking on at least a 10 ads (which would take more than a day since they don’t always show up) to just earn a single penny?

Also notice the red squares in the picture. These were the 2 offers I clicked on to see where they would take me. One took me to a website promoting a binary options system which as far as I’m concerned is an absolute scam for various reasons.

I’m fairly certain (I could be wrong) Neobux promotes these places and makes money if someone joins it through them. Why else would they promote it as an ad on their site?

I’ve seen this kind of stuff before on the other rewards sites I’ve explored:

The point I’m trying to make here is that while it is optional to join the programs advertised through Neobux, you can’t really some of them because they can very well be scams.

Where you can earn a lot of points in Neobux:

If you’re going to get anywhere with Neobux and make “decent money”, you’d want to head over to the “Offers” section which features various offers such as apps, games and other related things you’d need to actually download and try. I noticed some of the things they offered, you would have to pay for in order to be eligible to receive the points so that’s not very cost effective in my book.

Honestly, I have mixed feelings about this. I’m certain that some of the things you download are harmless and even fun, but I simply don’t trust a lot of the offers there. And on another note, it’s a one time thing meaning you install the app or whatever is offered and then it’s no longer available, meaning to earn good money, you would have to keep downloading new things and because there’s no telling if an offer there is legit or not, I wouldn’t advise it personally.

Other ways to earn:

There was also a mini jobs section in the sub category of offers. There you get access to a few offers everyday which involve things like surveys, evaluating certain programs and other offers along those lines. The amount you get paid there is also very little as far as I’m concerned. Here is a screenshot: 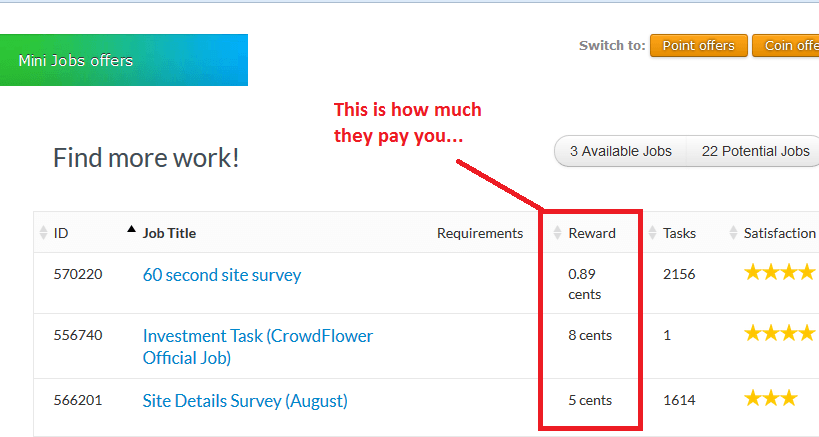 Red Flag (I would avoid it)

2 out of 10 stars. Yes you can earn something, but in the long run, I don’t feel it’s cost effective. If making money online is what you seek, it’s not a get rich quick scheme, but it is possible and it’s what I personally do full time. Here’s the program, Wealthy Affiliate which helped me do it.

Even if you take into consideration the offers which pay you a lot, I don’t see there being much sustainability in making good money with Neobux. I know there are a lot of people who join that program to make something extra and have no intention of it becoming rich, but I honestly feel even for those people, places like this and the other rewards networks I’ve reviewed before just aren’t good enough.

They pay you very little and require you put in a lot of time before you get anywhere and if you consider those things, then the amount you work vs how much you get paid for it isn’t enough. At the same time, like I said before I can’t blame these programs for giving so little.

After all it’s not difficult to do a lot of the things they ask for so naturally compensation for that work shouldn’t be big to begin with, but if you’re looking to make good money with Neobux, I wouldn’t count on it. There are much better options like Wealthy Affiliate out there.

One last thing I want to mention is that a lot of people join programs like these because of the get rich quick mentality. This is a wrong way of looking at things and a lot of places on the internet purposely prey on that mentality which causes a lot of people to get scammed. Though I wouldn’t consider Neobux a scam, I also would never recommend it to anyone, even those who aren’t interested in making good money.

But the decision is yours.

2 thoughts on “Is Neobux a Scam? What I Found Out About it.”