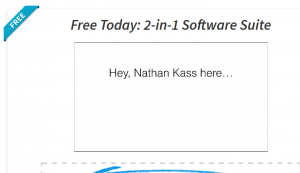 I consider what Avalanche X does to be considered a bait and switch method of making money and in this review, I’ll explain what that whole thing is and why I think it’s likely a scam too.

Overall Rating: 0 out of 10 stars (A hosting scam. That’s all that this really is.)

There’s so many things I want to discuss in regards to Avalanche X and most of them are sadly why it’s hyped and won’t work.

Now I’m not saying this because I’m a pessimist. I am saying this because after seeing the webinar and seeing what was being advertised and what they’re actually selling to you, I know it’s a scam and as for what you get, well I’ve tried something similar like that before and it didn’t work.

Avalanche X in a nutshell:

In exchange for signing up to the hosting plan, you get a bunch of free websites you can sell products through. But behind everything you see promised, all the bonuses, all the information you get in the webinar (it’s really just a sales pitch and it’s also fake) is just Nathan Kass trying to get you to buy hosting services from a company he’s affiliated with (see what affiliate marketing is).

I’ve reviewed many programs before which have said that they are giving away tons of bonuses valued in the $1,000’s and it’s all going to be free and as I clicked through, I saw I had to pay for hosting. Then it became very clear that the bonuses and values were all inflated in price and it was just trying to get me to buy that hosting.

This is exactly what’s being done with Avalanche X except their sales pitch is a bit different. It begins with the webinar you can access for free.

Understand that this webinar isn’t being shown to you is NOT in real time and all the things you see in the chat aren’t real. I tried on 3 different occasions to type a question. I only asked if this was real. All I wanted was 1 yes. Just 1. But I never got it. In fact after retrying 3 times, I saw the same people, posting the same messages and I knew it was either a recording or something fake (or just both).

The webinar itself doesn’t offer much value either (few do these days). It just shows you a bunch of sales pages Nathan is going to give away to you “for free”. He says these pages are going to convert very easily and after looking at them, I need to explain why this isn’t so.

The first argument I pose is questioning where your visitors are going to come from (traffic). If the traffic is very broad and from everywhere, your conversion numbers are going to suffer a lot. You’ll be lucky to even get 1 sale. I know for a fact that any sort of successful online project requires a good sales page and really what I called laser targeted traffic. I don’t feel you get either of that with this program. If anything, you may likely get either junk traffic or cold traffic, and neither of those types of traffic do well.

The second argument is that even if you DO have targeted traffic and everything down, the sales pages themselves lack substance and really any value. Based on what I saw advertised on the webinar, it’s just a regular old school, HTML type page that just promotes several products and gives them ratings. Barely any content. Barely any value.

When I say old school, I’m talking 2007. Back then those types of pages might have worked. But today, no. I’ve tried something like this a few times in my many failed efforts online in the past and I found out the hard way this is not what sells. You NEED to offer customers and visitors value and there is really none on the sites I saw. Here’s an explanation of how the process of making money online works.

People aren’t going to buy unless they really know what they’re getting. Coming to a site which basically says “buy this” isn’t what gets them to buy and that’s basically what I saw in all of the pages Nathan showed. All that high conversion talk from is just a way to make you think making money is effortless. He’ll just give you profitable sites, you use them and that’s it.

But sadly this is not it. And if nothing else, you’re just going to lose money through these sites and sending traffic to them. I’ve learned this. Many have learned this too. Don’t make the same mistake.

The last argument is really connected to the second and that’s that pretty much anyone these days can make a simple website and give it away while making it sound like it’s the next big thing and when you really see what’s going on, they are just doing it to sell some sort of program to you or in this case hosting. Whatever, you want to call it, it’s really a scam when you blow the cover off it.

0 out of 10. The only thing related to an avalanche here will be money out of your pocket.

It is a scam to take something that won’t work well and make people think it’s worth more than it really is. In my opinion, this is what I see with Avalanche X and for that matter any program in the past I’ve reviewed which ended up promoting hosting plans. They all seem to follow this same pattern. And this is because they are doing everything they can to make the sale. It’s not wrong to tell people something works well, but that’s only if it really does!

So if you think that through this program, you can make some good money and even get an online business going, I want to stop you right there and say it won’t happen, not with this program, not in my opinion! If you want to see a program that you do have a good chance of building a real online business with, then take a look at the Wealthy Affiliate program for that.