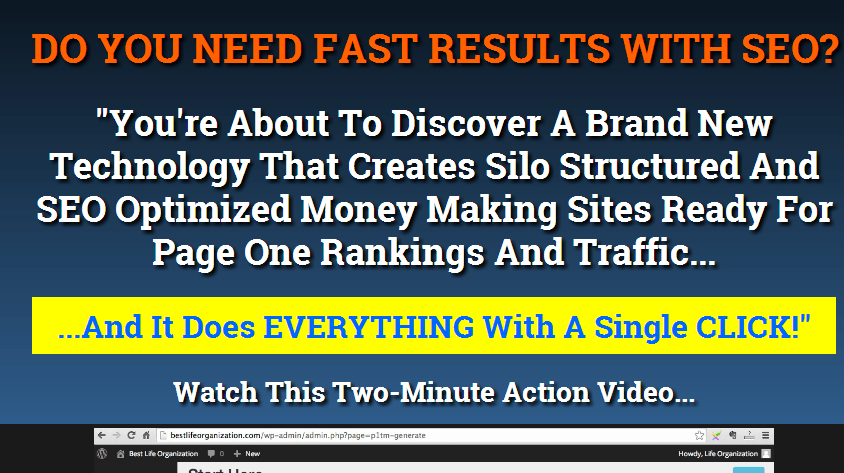 The other day I joined in on a chat taking place in Wealthy Affiliate. In the chat, one individual whose name will remain undisclosed was talking about the P1 Traffic Machine and asking if they could use it with WordPress sites.

While the answer was yes, that person was also told this program was not a good idea to use, not because it’s a scam, but because the idea of using software like this to generate silo structured websites can & will most likely lead to bad results in the long run when trying to make money online.

P1 Traffic Machine in a nutshell:

A software program which generates several things with the push of a button:

The basic idea behind this system is that silo structured websites are the way to go if you want to succeed in SEO (Which is somewhat true).

However because most sites, including silo ones require a massive amount of content to be added before you gain that authority to be ranked high in search engines and get a lot of traffic, it will take a lot of time and effort to make this happen on your own.

This is where the concept of software programs like P1 Traffic Machine come into play because they promise to help you generate all that massive amount of content in minutes without you having to do it yourself. The idea is to save you tons of time.

In theory or as the sales pitch goes, utilizing this system will gain you high rankings and a lot of traffic very quickly which will mean more money. But that is really theory. The truth however is quite different…

1) Silo structured software programs are things I will never recommend.

I feel the end result is just horrible in terms of what it creates. Yes you can create a lot of content very quickly and not worry about having to find/create your own content, but if you look at the example website P1 Traffic Machine showed in it’s video (bestlifeorganization.com), the site is:

Looking at the site and seeing all these problems, I would never stay on it for long (maybe a few seconds). I’m almost certain most other people would do the same so it doesn’t matter if you have those high rankings and massive traffic. If the site doesn’t look good or have understandable, organized content, you’re not going to make squat. I don’t believe this is a good way to run an online business.

One could make the argument that this is just 1 site and 1 program, but I have yet to see ANY silo building software program deliver on making beautiful websites. I’ve checked 3 others, with the most popular being a program called SEO Zen which also builds silo websites. I also saw similar end results with that one, although truth be told, it was more organized.

I’ve always asked people who try these things “Have you ever wondered where this content comes from?”. One has to wonder because no machine is smart enough to create it’s own content. It has to take it from somewhere.

In this case, we’re looking at content that is taken from other websites without people’s consent. How would you feel if something you wrote was taken and used by someone else? This is called plagiarism.

In some cases, programs like these also have content spinners in which the content they take is spun, meaning the wording is changed to mean the same thing, but to give the illusion that it’s 100% unique. This is what I call indirect plagiarism.

To rank on page 1 of Google, what you need is to write unique high quality content, period.

And if that doesn’t bother you, then you might want to consider the next con:

3) This approach to SEO is likely to get your site slapped and taken off search engines:

Places like Google are good at finding websites that use these sorts of programs. They see these things as a way to “cheat” the rules they set in place for sites to rank high and when they catch you, they will remove your site from it’s rankings and perhaps even the whole search engine altogether.

While most programs that produce silo structured websites + massive amounts of content MAY see fast results, they will not be around for long and if you think you can keep bouncing from one site to another, reusing the same program, making a quick buck then repeating the whole cycle again, then sooner or later this system will fail. Again this is NOT how you build a long term online business.

4) You’re going to spend more time correcting and changing the content than if you were to make it on your own.

If the content that is taken from other sites is not spun, you’re looking at duplicate content which is also a thing Google does NOT like. They will take your site out of their search engine for this.

But if the content IS spun to look 100% unique, it’s never going to look great. Seriously, I’ve looked at many different content spinners. NOT ONE has yet to produce anything that reads well which leads me to main point I made:

You’re going to have to change it around to make it read well and I can almost guarantee you the time spent doing this will be just as long if not longer than had you written up your own stuff.

Long story short, you try this system to get fast results, but if you’re going to make ANYTHING good out of it, ironically you’ll have to put in more effort than if you were doing things legitimately.

Forget these “fast” approaches to success. They don’t exist. See my #1 recommendation which is Wealthy Affiliate to earn real money online.

1 out of 10 stars. I will never recommend this. Even if it was a penny. Never. See Wealthy Affiliate if you really want to succeed online.

As long as internet business exists, there will always be a demand for programs that supposedly get you fast results. There’s nothing wrong with trying to get faster results, but more times than not, what usually happens is that the methods people produce only work in the short run and are ethically questionable to say the least.

Methods that P1 Traffic Machine uses is said to provide you fast results, but if you look into it very carefully, there’s way too many red flags. The same person I mentioned above who was trying to use this program defended their purchase no matter how many people said it was a bad idea. I guess they’ll have to find out the hard way what happens when you use programs like these.

My final advice is to avoid this “fast approach” to making money online, because in reality these programs will end up doing the opposite if you want to make them work for you. It’s much better to pursue legitimate methods that do take time to build up, but work in the long run, then looking for quick fixes that will always break.