Several months ago, I wrote an article in which my intention was to give people an example of how to profit of an excellent niche idea I had. I said in that article that I didn’t have time to make it myself but honestly, right after I wrote it, I though a great deal about it and figured I should try it.

The article and the “secret” niche’s details are all here, but since 5/1/16, the site was created and I’ve been slowly doing exactly what I recommended in that article which is:

I’ve been finding very low competition keywords and writing as much as I could about them. I know some things about this niche, but as it turns out, when I began finding the keywords and researching the information, I discovered that I actually knew a lot more than I though.

I also saw some competing sites within the subject and found that they all to some extent lacked not just information within the topic, but that they also didn’t know how to market them, which gave the site I was making a huge chance to succeed.

Since it’s been 3 months, I have written in total 17 posts and 1 page. The page doesn’t really count because it doesn’t chase any keyword, but the other 17 do and frankly I’ve been amazed at what has happened to this site in terms of ranking and that it’s “vindicated” what I believed, that this niche and the site you could make may end up being very profitable.

How the site is doing in terms of ranking:

On one hand, because it’s only 17 keyword targeted posts, I haven’t seen many 1st page rankings, nor have I experienced much organic traffic yet.

However, if you understand the flow of SEO, you know that generally this period and the rankings during it are usually very low, so I was not worried about the current results I saw.

But the rankings I did see, despite not being on the 1st page are extremely promising because there have been a lot of indexes going on with the site and to be honest, I have never build or seen a niche site rank or get indexed for many searches so quickly: 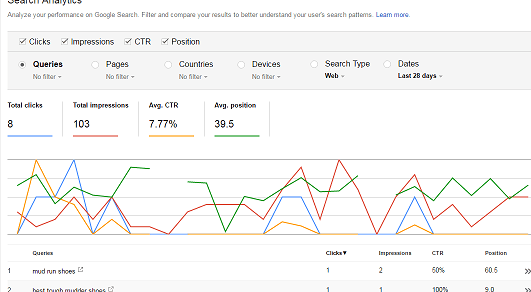 That is a report from Webmaster Tools on the page. Currently there are 27 keywords for which the site is being ranked, many of which are LSI terms rather than the ones I am chasing.

If you are unfamiliar with the line graphs, basically it’s showing the activity of how often the site pops up, how many clicks it gets and the positions of the terms. As you can see, there is a lot of activity which is very, very good for new sites.

Compare that to another niche page I’ve been working on for over a year and how little it received:

Now that one is in a much more competitive niche. I have over 50 posts there and a few pages and despite there being MUCH more content, there is little activity and the first one is seeing so much more progress.

What this shows is that the potential is absolutely there and I am chasing the right keywords and in the right niche. Carrying on this way, I just have to keep writing the content over and over and I believe at a good pace where I write posts weekly, I can easily start seeing 100 visitors daily (organic) before 6 months.

How much the site is making:

Thus far, the profits are $0, but for several “expected” reasons:

1. The SEO ranking of many terms is not on the first page as I already explained which is fine for now but currently, this is the reason why there’s not much traffic.

2. I only started adding affiliate links today (after 3 months!). But that is because I haven’t done posts where I advertise any affiliate products. I only recently started to and because of that, I started doing PPC campaigns for the products I am reviewing.

In the original article where I revealed the secret niche, I explained that you could have been using Amazon to promote the products and I found a number of them that were selling well. Out of the 17 posts, about 4 of them are product reviews and now there are 4 separate PPC campaigns funneling traffic to the site.

Note: I typically advise people focus on SEO first before hitting the PPC world, but here I am going a bit backwards and the only reason is because the products being promoted are currently selling hot and I don’t want to miss making extra bucks. Plus from my other niche site’s profits, I have money left over to put into PPC. I would not advise you start with PPC and then do SEO like I am if you’re broke.

The products are definitely selling as Amazon shows, but through PPC I will be able to filter out if the reviews I wrote work. I even purchased a number of products for several $100 in total to make my reviews better.

I still stand by the idea that this site can hit 6 figures and the pace I am going, it can happen.

The ironies of working on another niche site:

I don’t recommend having several niche sites until you have at least 1 working for you, but in my case, I have that option.

As I said earlier, I have found that through writing on it, I actually knew so much about it which translated into easier content creation.

I also find myself having a ton of fun writing on it even though at first I though I wouldn’t. Even after writing this current article, I am anxious to get back to that one and write a new post because I enjoy it so much.

I am also not in a hurry with that page and ironically, it seems like the results of it are faster. With my MMO site, I had a period where I wrote posts every single day, so in 3 months, I would have at least 90 articles whereas with this one, it’s only 17. Despite that, I would recommend you write as often as possible, but enjoy the content you create on it rather than forcing yourself to create it.

In the next 3 months, I want to have 3 times as many posts on that site and cross 100 visitors a day and I will be doing an update post on it here.

4 thoughts on “A 3 Month Update on a Secret Niche Site I’ve Been Building.”