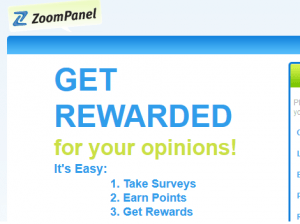 There a plethora of bad survey sites online and in this review, I’ll explain why, sadly I believe Zoom Panel is one of them, which ones are not and why you should just do something else if you want to make money online!

It’s not a surprising rating really. It is after all just a paid survey site and it doesn’t really pay well (not even close).

This is your classic and typical waste of time paid online survey site that takes too much time to focus on, and rewards you very little for that and the keyword is very little.

The one place where Zoom Panel NOT typical is that it actually doesn’t have ANY open surveys when you sign up which means you can’t start answering them and earning anything when you join. I have never run into a single survey site besides this one, even the worst ones that were totally closed to allowing you to earn when you first join.

What you earn in Zoom Panel (it’s not really money):

Earn is an interesting word when it comes to Zoom Panel and what you get from using them, because it’s not actually monetary rewards, it’s points. But the points can be redeemed for gift cards.

You get 50 points for signing up and absent that, there is no other way to currently earn the points other than wait for an email to arrive saying a new one has opened, but how long that takes is a mystery.

Why there’s no point in exploring Zoom Panel further:

Usually on my part, a lot of research goes into exploring programs. However, Zoom Panel really doesn’t require that because they’ve already showed how they function very early on. And I know good paid survey sites too well already and can basically provide all the information you need without even looking at any particular survey website.

Therefore in my opinion, there is no need to:

You get rewarded very little. The amount you can exchange for the points you get is VERY little and it’s a waste of time.

Are all paid survey sites this bad?

If bad is earning little to no money, then yes, they are ALL bad. There’s 3 types of survey sites in my experience that exist. I’ll ascend from bad to “good”.

Fake survey sites which are affiliate sites in disguise that say they’ll show you the most “profitable” survey sites ONLY if you pay them a certain fee. These are the absolute worst you can ever find online. Click 4 Surveys is one of the many examples of these types of sites going on.

They are scams and there’s no better way to identify them otherwise. They make you think you’re getting access to some sort of secret surveys no one knows about if you just pay them. Such a lie. It’s absolutely disgusting.

Sites which are FREE to join, but don’t pay or award you well enough to make it worth even trying. These types of survey sites provide a bunch of surveys for you to take, but only award very small amounts that will hardly ever add up to pennies and never good money.

They also limit how often you can take the surveys so they keep you around more often but it also inhibits your earning potential. These are also scams. You can go through hours/days/weeks and even months of actively doing surveys and still not make enough to buy a fast food dinner.

Survey sites which are simple to navigate and also provide very little compensation for your time but are up front about it and have a very easy operating program in place so even though you earn very little, it won’t take up much of your time so it’s sort of fair if you think about it.

These are the only survey sites I would ever say have ANY worth to them. The ONLY 2 I’ve ever found which were in the type 3 category were Swagbucks and most recently one called Paid Viewpoint. I was reluctant to even give them a thumbs up, but they might be the best I’ve come across so far.

But as you can see, even the last and technically “best” types of survey sites are still just wasting your time because there is VERY little to make. And I’ve compiled this information over many years of experience in this field. So it’s not an assumption. That’s why when I see Zoom Panel, I automatically know what type of survey site it is and why it’s bad. And that begs the following question:

Where does Zoom Panel fall into this?

Type 2. And that’s actually giving it a compliment considering there’s no survey you can actually take when you join! And even if you DO get a survey to take or don’t get the message I got, remember, you’re only given a few at a time.

1 out of 10 stars. Another bad online survey site.

My final thoughts and this is really the big picture:

This point I want to make is towards those who love to research every little thing within a program before purchasing anything and may accuse me of being too bias towards Zoom Panel or paid online surveys in general and not researching the programs enough. I believe in ALWAYS researching a program and always talk about doing it, but there’s exceptions to this.

If you’ve run into paid online survey sites as often as I have, you know it’s a waste of time and you know you won’t make any good money. That’s the main point so everything else isn’t all that important.

But if you think I’m still in the wrong, try it out for yourself. In fact, try out any survey site. I’d suggest the ones I talked about in the type 3 category. Then record how many hours you’ve worked with it and how much money you’ve made, then divide the 2 and see how much you’re making an hour. It’ll be insulting, I guarantee it.

Look, I definitely understand the appeal of online surveys, but after you know them as well as I do, you’ll never look at them the same way. It’s one disappointment after another and that’s why I switched from chasing these “unicorn” survey sites and looked for another way to make money online.

What I do to make money from home (Hint: It isn’t paid surveys): 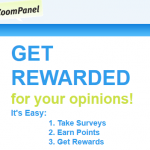 I cannot find a good thing to say about Zoom Panel, so if you want to know how I make money online, this is how and it takes work but it is better than using paid online surveys.
Click here to test drive Wealthy Affiliate risk free and get your bonuses (no CC required)