Another sleazy, fake program that I advise against. And don’t worry, I will make my points very clear on why I gave it this low score…

Do I recommend something else? Absolutely:

What exactly is Computer Technical Guys?

So for several weeks now I’ve been monitoring a website on the internet called Top Jobs Reviewed that reports on these scam programs consistently and recommends them. It is one of many fake work at home sites I keep an eye on.

In the case of Computer Technical Guys, it was recently the new promotion on the Top Jobs Reviewed site and about a month ago, this recommendation was different. It was called the Computer Geeks and it was made by a different, but fake persona known as Karen Williams. I am mentioning this because with these scams, these fake names are often reused.

When that program came out, I immediately warned people about it, as did other bloggers.

I explained my experiences in that I already had purchased that program and wasn’t happy with the training I got. In short, I didn’t think it was good enough to make me the kind of money it promised and I assure you, the numbers are made up to begin with…

But even though these experiences occurred under a different named program, the same people switched it to a different name, the one you’re looking at right now and if you are confused by how this works, worry not, I’m about to explain it and give you insight into a big scam going on across the internet:

-Let’s say the program behind all of this is called Program X.

-First it’s promoted under the name Program X. Then people who buy it realize it’s bad and request refunds, warn others, ect…

-So now the program takes on a new name: Program A, but if you buy it, you’ll still get the same Program X. Once people catch onto Program A, again the name changes…

-It becomes Program B, but still you get Program X.

Needless to say, I assume the Computer Geeks ran out of steam as this new one has just been released, but like I said, it’s not a new program, it’s just got a different label and I have had a plethora of experiences like this.

If it isn’t already obvious, I don’t recommend this program.

I have said and will always continue to say that programs that hide themselves like this, use fake names such as Linda Taylor in this case, make unsubstantiated income claims, structure their website in deceptive ways are not to be trusted. There’s a whole slew of issues, not just with the program itself, but with the sales page itself.

Honest programs don’t need to use these practices to get sales, they are open about who they are and how they operate. Any program which does the opposite clearly has something to hide. In the case of the Computer Technical Guys, it’s sales calls, up-sells and a low quality program, all of which equal lots of money spent and likely very little made in the process.

I’ve had many experiences where I’ve purchased these kinds of programs, and in extremely rare circumstances did I ever find one that was DECENT. Note I said decent, not good. In most cases, they are under par in terms of giving you training to make good money online. And the decent one I found wasn’t overly good either…

If you want to work from home, look for another alternative and I’ve got one for you:

This is the program I’ve been working with for years. It’s one of the trustworthy ones that I’ve found after reviewing a plethora of them. Fortunately it’s also free to try and there’s none of those shady misleading things like there is with the Computer Technical Guys.

Before I end this review, I want to say that I FULLY expect the Computer Technical Guys to switch it up in a few weeks and possibly sooner. If you are like me and browse the internet for scams and spot the name change before me, do let me know about it below.

This has been going on for years so I expect nothing will change the next time they switch it up. But if you’ve already seen the sales page of this program just know that if you see something similar, that you will already be on guard. That’s how I learned to avoid scams.

In the meantime, rather than waste time spying on scams all the time, I would think it’s much better to focus your energy on a program that will actually work and like I said above, this one is the best.

It’s been around for a long time, it’s made a lot of people good money as well as myself (but only if you work hard). I recommend you read my FULL review on it:

Either way, that program was what showed me the CORRECT ways to work from home, then the steps to do it, then to realize it and now I do it full time. In addition to that because I know the right way to make this work, that is how I know other programs like Computer Technical Guys don’t do it the right way.

Remember, I did say I already tried that program (but when it was named something different) so I already know what’s inside.

Anyway, now that I’ve concluded this review and exposed another scam, I hope you guys will avoid it and at the same time will know where to head instead. I’m not saying you should only try my alternative program, but it’s a great one. At the very least, be careful when browsing the internet as scams like Computer Technical Guys are everywhere and very hard to avoid… 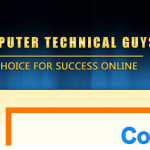 Yes, this is another fake work at home program I would stay away from. Want a good, legitimate one? Here you go.
Click here to test drive Wealthy Affiliate risk free and get your bonuses (no CC required)