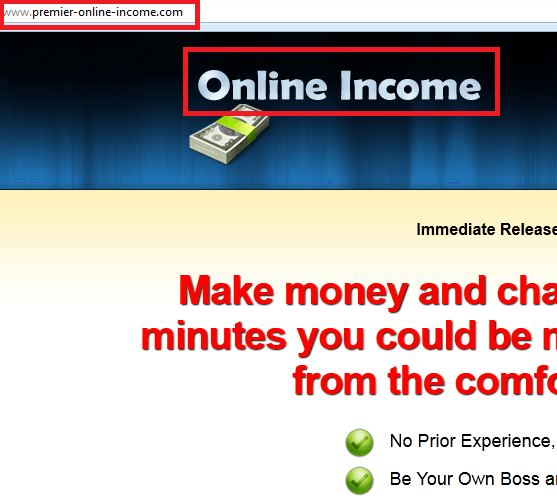 I’ve spotted many copycat link posting scams before, so when I stumbled onto Home Internet Cash, much like with the many other sites that:

I knew there was no debate.

The good news is that I believe I’ve spotted this program in it’s infancy, meaning there’s still time to warn people about it before too many get suckered in.

Just like the other scams like it, it’s another link posting “opportunity” which says it’s simple to make money by placing links for big companies that will then pay you ridiculous amounts for it. This is such a distorted promise that even if it’s true, it’s still as close to a scam as possible. I’ve seen WAY too many sites like this and they pretty much all operate in the same way so be careful.

The truth of the matter is that it is possible to post links and earn money, but not through the simplistic ways you’re led to believe and certainly not through this place.

What REALLY happens is that if you have a website and visitors coming into the website, you can post what’s known as affiliate links (affiliate marketing can truly make you a good income, but to really get started correctly, do this.) that promote products, sometimes from big name companies for which if someone buys it, you earn a commission. That’s the truth.

But this is NOT something you’ll be told by Home Internet Cash. Furthermore, I don’t even know if the name of this program/site/service or whatever the hell it’s called is actually that name. While looking through the site, there were at least 2 other names I found:

So if there’s more fuel to add to this fire, it’s that there’s no clear name of the website and in my experience this happens more often than you think. What I mean by that is, when I first stumbled onto the actual program. it read as “Home Internet Cash”.

Then when I clicked through to the actual site, it said “Online Income”, but the name of the website was Premier-online-income.com. It doesn’t really matter, but I just wanted to bring this to your attention.

Here’s the good news though:

I’ve always wondered how these places can keep changing names and continue to get visitors. Well I think I’ve finally found the answer:

They basically advertise on big name websites which get a lot of visitors. You may/may not have seen ads on some websites that tell you they’ll teach you how to make money. Well when I clicked on one of those ads, I stumbled onto this website:

I want to note how “official” the website looks. It is NOT. This is a common work at home special report site which is fake and often promotes these exact scams.

It also NOT endorsed by any of the big name companies (I kept that part of the picture out) you see labeled there. They keep repeating this same formula and basically recycling the same types of websites, but only changing the name and people keep falling for it.

So make the point clear, by finding the “source” websites where they originate from and what they look like (which you already do), we can do a better job of educating and preventing people from getting scammed by them. There’s literally 1,000’s of people who are losing their money buying into these places every single week/month. I know this since once of my reviews on these places has gotten me 1,000’s of visits.

I also think when it comes to Home Internet Cash, I believe I spotted this place while it’s was/still is developing because as I was researching it, apparently not too many people know about it. Just in case you’re wondering how I know, I was using a keyword tool called Jaaxy which basically showed me these results:

With the other copycat companies, they’d get 100’s and even 1,000’s of searches monthly. When it comes to this particular place, as far as I’m concerned, it’s 96 too many. Anyone of those people could have already fallen for this.

One more thing: To the people who will criticize me and say things such as:

After seeing nearly 10 others like it, the most popular being Online Profit Stream + the massive amounts of complaints I’ve had people share with me (see this review of Online Profit Steam for yourself), I think it’s safe to use the duck analogy here (looks, quacks, acts, then it is).

And if you still don’t believe me, by all means, try out Home Internet Cash or whatever the hell it’s really called and let me know what your experiences are. You already know my position on it.

0 out of 10 stars: There’s not much else to say other than stay away from this place. If you’re looking for truly legitimate ways to succeed online, then this is my best recommendation: Wealthy Affiliate.

So let me just summarize that if you’re looking for an opportunity online, this is not where you’ll find it. In my opinion, this place is again one of those copycat scam sites which says it’s easy to make money posting for big name companies, but this explanation is VERY simplistic as well as distorted.

Even with other places, one common feature besides how “simplistic” they make themselves sound is that they don’t really give you enough details as to what you’re doing, making them look like shiny objects.

They try to remove your logical/skeptical side by using some of the most cheapest marketing tactics around. But now that you know better, you’re that much closer to finding what truly works (here it is) and never falling for another scam like this one again.

Do you agree/disagree with me? Have you ever encountered any other place like it? Let me hear what you have to say about this place!

2 thoughts on “Home Internet Cash a Scam? I Think so”