Well here we go again, a penguin update (4.0) has taken place and many people with websites freak out because they think their sites will get penalized. But I always love it when a new update takes place. 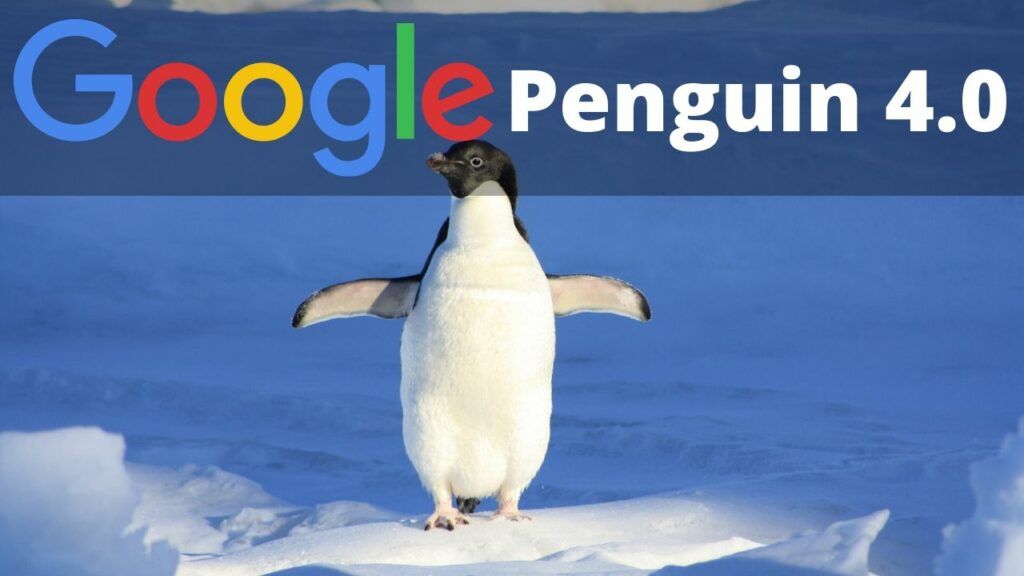 Why I love Google’s penguin updates:

Because it means there’s less clutter on Google and more space for my site to occupy the higher positions. And to show you this, I will show you a few websites I’ve been analyzing pre penguin 4.0 and post, analyzing some keyword rankings I have and we’ll see if anything has changed…

But first let’s just quickly go over the basics of the update:

I don’t really go too deep into these things because most of the time, these updates and blog posts which explain them thoroughly tend to focus on what people should not be doing to get punished and honestly, with this update, any previous ones or any future ones, the SAME classic idea to remain safe on Google is to follow these 3 suggestions for Google’s algorithm changes.

So if you want details on the current update, just read that post and you’ll basically have the big picture. And notice, it was written 2 years ago. In short, Google is just perfecting the cleanup of their search engine, that is basically it so these updates are just sweeping the whole system each time. They’re just becoming better at sweeping every time is all.

Are you scared? Well you shouldn’t be if you’re not trying to play Google:

If you have been someone who has actively engaged their website with anything black hat or you haven’t built up any sort of authority on your website, white hat style, then your website may be the target of this new update.

And honestly, if you’ve been engaging in that for years, you would have probably already lost at least several sites in doing so. Why continue and hope that this or the next update won’t hit you?

That’s basically what I’ve been doing for years, on this and every other site I’ve had. I never worry about the Google panda. White hat methods work, every time.

How has Penguin 4.0 affected my websites? Let’s take a look!

I’ll be examining 2 websites, 1 weight loss page I have and this, the make money online one. What I will look at specifically is BASIC overall traffic stats before Penguin came about (Late September) and the weeks after.

I will also screenshot some keywords I’ve had recently and see if there’s been fluctuations in positions. But overall, I will spoil the results by saying…not much has changed.

I have had very little fluctuation. I did experience SOME decreased rankings for a couple of days leading up to and crossing Penguin 4.0, but after that, things really came back.

People will always experience some sort of ranking fluctuations even when updates in Google don’t take place.

But anyway, let us examine the 2 sites right now:

This site has about 20-30 articles, is only white hat, but isn’t really active for me anymore. It’s up, making a sale rarely, but it pays for the domain so I still keep it. And the update has not impacted anything:

Yes the traffic stats aren’t that good either, with a few dozen visitors coming daily, but there is some pretty stable stats being shown here.

This leads me to believe that the newest panda update does not at all impact sites that aren’t actively putting up content. Thus this safe appears to be safe.

Because the stats for this site are stable, it’s also logical to believe that the keyword rankings are also the same. After all, how else would the traffic remain this constant?

I used this examine because it is one of the LEAST productive websites I have. If there was any real competition activity trying to outrank me, they probably would.

But this hasn’t happened and panda didn’t hit this either.

2) Next is one of the main sites I am involved in:

Again, nothing but white hat stuff, active content creation weekly. Has the update affected this page negatively? No.

Again, rankings appear to be stable.

And so it would appear that this site has also been able to withstand the recent update. But as I’ll point out later, it’s not a question of withstanding or getting lucky and not spotted by Google, it’s just a matter of doing the right things (those 3 things above I pointed out).

First of all, I did a post on 1st page Google rankings I’ve had (this is it) and had a screenshot of some results I’ve had back then. What I did here was compare THOSE results (left) with where my site is today (right) for the same terms.

Let’s see what has changed: 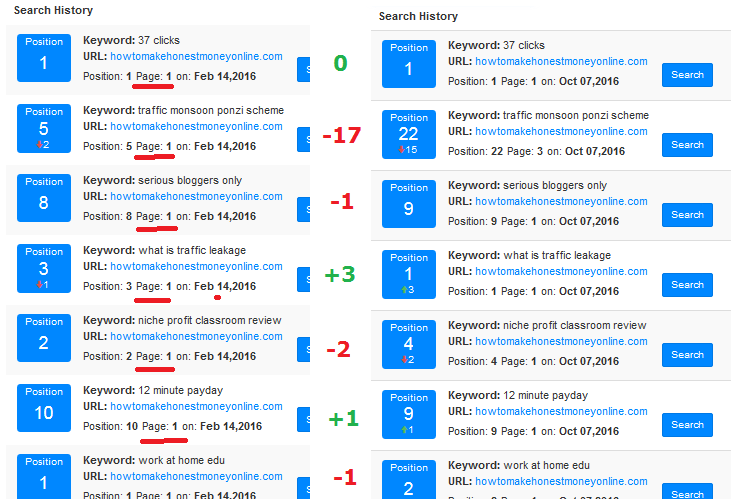 Well overall, we have 1 keyword remaining in the same position, 2 moved up and 4 moved down.

In those 4 negative results, 3 of them were minor. Minor meaning they only moved down a spot. If it moved down double digit spots, then it would a big problem, but it didn’t.

The ONLY keyword that moved down was one for a program called Traffic Monsoon. What happened there?

Well not too long ago, that particular program was shut down, which caused a surplus of searches to arise for it. I am sure many bloggers with existing authority websites wrote on that and had many people commenting on it which made the competition for THAT keyword much higher, bumped up the search queries from people and added more competing blog posts for that term and any LSI’s like it.

As a result, because of all that new influx of competition, this moved my original position for that term down substantially. But this had nothing to do with penguin 4.0, just regular competition arising.

And furthermore, if I do searches for other terms, I will find my website also fluctuates up and down in minor amounts mostly. This has been the case for me for years and it shows that each of these updates do not touch my site and that the regular rules of SEO are what’s always happening.

Am I worried that I went down several spots in certain searches? Not really, although I’d always love to hold to the top positions, I understand that these fluctuations are a part of SEO. I’ll just keep finding new keywords to occupy high spots. Again, even my lowered rankings were minuscule. I am getting traffic from that and many of them are bouncing back to their original positions as well as higher.

White hat SEO makes you pretty prepped for Google panda’s wrath and no matter which update/s come out.

Furthermore, you are rewarded and get higher rankings because of all the garbage sites that get kicked off the search engine or get de-ranked.

And that is why I love the Panda update/s and if you follow anything white hat, you should too.

In all the above cases, all I really showed you was that the Panda update did NOT affect those sites. What was happening before with a simple Google dance (fluctuations) was still happening in minor amounts. For the most part, my rankings have remained the same post panda 4.0.

5 thoughts on “How Google Penguin 4.0 Affected my Websites (Why It’s Good)”