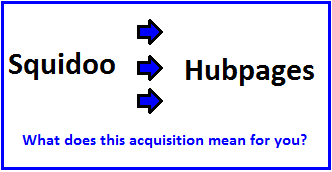 I’ve used both Squidoo and Hubpages for online marketing projects for a long time.

I want to talk about the acquisition that occurred about a month ago, if this is good or bad and if you should get in on it. First, I want to explain the reasoning behind this move:

As I understand it, this move was made to supposedly make the combined result more stronger.

Squidoo at one point at a high page rank with Google, but like most article directories, it died out due to spam and bad SEO practices. Hubpages did similar things, but adjusted to prevent that which is why it’s still somewhat relevant today for rankings and used more.

So with Squidoo moving to Hubpages, you’d basically have 2 times as many people posting content on 1 newly formed platform, with higher expectations to prevent a repeat of history and then the Hubpages site can technically have a stronger presence online and in rankings. If you were a lens maker on Squidoo, an option has been made to move over your existing content to Hubpages.

Details of why Squidoo lost it’s favor with Google and eventually got acquired by Hubpages:

Basically, a lot of issues were occurring with Squidoo in the past where their authority with Google was decreased due to a large amount of bad content being produced on the site (much of which was spam). Lenses, which were blog posts on Squidoo that once ranked high on search engines now lost their positioning and a lot of Squidoo’s revenue went down the drain.

This happened years ago, back when I was still posting and when this issue arose, Squidoo put in some very strict policies that would prevent abuse of their system. In short, people who posted low quality content, among other things had their content deleted (including old content) and in some cases were banned from posting on the site again.

Now I didn’t have problems with this, until I was caught under the bus. I explain the whole Squidoo story here, but in a nutshell, my lenses were erased even though I personally feel I wasn’t violating any rules and all the profits I once made with Squidoo were now gone. It wasn’t an easy transition, but I forced to adapt and move on.

I think Squidoo overkilled it’s reaction to the Google slap it received and it in turn caused even more problems to occur as now even it’s best lens makers were now angry (including myself) and this made a lot of us move to different platforms. It was a downward spiral.

Is the move to Hubpages a good idea for Squidoo?

I have mixed feelings about this. On one hand, I believe this new move by Squidoo to move over to Hubpages is also being done because their policies are kicking out way too many people and they feel that if they don’t do something drastic, they may lose their business, thus they are moving over to Hubpages which I believe may also have the same issues. Their combined forces may fix this problem.

However, there are 2 main issues I see that may not help this acquisition, but only buy time before things go bad again:

1) They need to prevent abuse of their site by having more manual monitoring.

2) They need to have MUCH better TOS. The problem Squidoo had was that their TOS was very broad and a lot of people including myself suffered their wrath even though we didn’t violate them. This caused a a “blowback” type effect and many people ended up leaving.

If these main problems aren’t fixed with the acquisition, then they will fester and cause the same problems to occur again.

Should you start posting on Hubpages?

Honestly, I don’t feel it’s worth it. I believe if you’re aiming to build an online business or make some decent cash, you should do it via your own website.

I’ve also reviewed Hubpages and basically, I still believe in what I say about it.

Now while it is true that your website initially will not have the same prestige as Hubpages, overtime it will benefit you to do this because you control everything that happens. With Hubpages, you must be careful not to break their rules. I find it easier to work without limitations.

I haven’t worked as much with Hubpages as I did with Squidoo, but the days of online marketing have changed. At one point in time, these places were gold mines for affiliate marketing and making great money with it, but as things evolved and these places as well as article directories and other types of content farms began to lose their fuel, the focus moved more towards having your own site and letting that fuel your business.

While there are still plenty of people using Hubpages & still Squidoo, I would personally recommend moving away from them, getting your own website and continuing your work there.

I see so much amazing content posted on places and honestly believe that there is so much more money to be made if you do it on your own. Because of some very strict policies, you can’t really promote much and/or earn nearly as much as you would if you did it on your own site.

If monetary benefits is what you seek, my advice is to make your own website. It’s very simple to do. If you just like posting content and don’t care much about making money, then you can keep working with either Squidoo/Hubpages, although I still recommend the first option because you never know if you change your mind in the future.

Keep in mind that all the content you post on those sites can at any point be erased if your content breaks the rules. This is such a risky play. Imagine putting in all that hard work to then have it all erased. This happened to me. It happened to many others like me. When I’m not in control of what I write, I believe that’s a bad idea.

Would I ever recommend going back to Hubpages/Squidoo? Probably not. Things have changed so much since their golden days and I don’t think it will ever go back to that.

The problem or solution, depending on how you look at it is when you have one of these popular sites allow anyone to post content, you’ll inevitably get people abusing the system. It’s just the way things work with content farms and when that happens, it damages the site’s reputation as a whole and if there is any chance of it getting back to it’s original potential, they would have to fix the things I indicated above, but I doubt that’s ever going to happen.

What do you think about this acquisition? Have you used either/both of these sites? Let me know what you think!