I’d like to do another followup case study on an experiment which I started running awhile back using Amazon. This idea involved making money leveraging this site and in my opinion was not only brilliant (because it made over $5,000), but in hindsight, had I truly worked on it harder, I would have probably made several times more than what I have so far.

And yes, I am hitting myself for not doing that, but more on that later!

This experiment involved “unleashing” the power of a popular area of Amazon known as the best seller list. But this was not on the overall top 10 list you see on their front page, but on the best seller pages for specific niche products, which were diet books in this case.

I ran this experiment over an 8 month period on 4 different promotions and in the process earned over $5,000.

Now the $5,000 was in revenue and about $1,110 in advertising costs I spent to run online ads to promote whatever it was I was promoting.

For the full details on how I set up this idea/experiment, please read the article I linked above (the best seller list strategy). This article just explores the result of that and ways to improve it.

The short story of how much I made with Amazon and how I did it:

Anyway, back to the results.

Obviously, an extra $5,000 is nice, but remember, I did say I didn’t explore the full potential of the strategy I used and the only reason why I didn’t fully engage in it was because I was lazy. Yes, this is literally the reason why instead of making an extra $50,000, I only ended up making $5,000 (revenue).

Yes I am an idiot and I am going to go in-depth on why and prove that this is around how much money I missed out on and that following this article, I’ll get back into finishing this idea.

More information about my strategy:

I mentioned the strategy above, but I didn’t go into enough information about it.

To add on to what I already said, I also I made about $10 in actual Amazon sales from doing this, but remember, the majority of my promotions were for products outside the Amazon promotion, which were from Clickbank and that’s where the $5,000+ mainly came from.

Now I did mention also running online ads, and it was from a network called Bing Ads and in the span of 8 months, I got about 16,000+ clicks on my ads, numerous sales, spent about $1,000 on the ads themselves and made over $5,000 in revenue.

So now you understand the costs involved.

2 major mistakes which led to so much potential money lost! 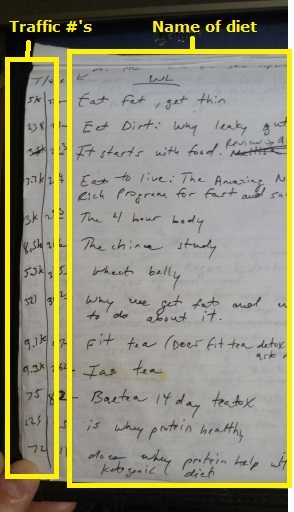 I had a list of about 20 different hot diet products I found. And laziness caused me to only complete 4 reviews for them!

I put up the list in a notebook, cross referenced the name of each popular diet with how popular it was through Jaaxy, recorded how much traffic each of them was getting and then based on which had the most traffic, I’d work my way down and review all 20.

2) I didn’t fix my main landing page was awful.

And that is the main landing page which promotes the Clickbank product. It really sucked and that affected my sales rates!

And again I didn’t fix the site because of laziness (until I was too late).

The experiment I ran with Amazon was not just successful, but it was something that if fully focused on, could have exponentially made more and it still can.

That’s where the 2 problems I pointed out need to be fixed.

Honestly, the amount I could have made in these 8 months scares me, mainly because my laziness was the main contributor to me NOT getting there.

But it’s not like I had nothing else going on.

I was actually focused much throughout this period on building this blog up and making a more passive income with it. One idea I’ve been exploring and doing little by little is hiring a legitimate writer to handle this strategy for me.

All I’d need to do is basically pay him/her to write articles on the above diets or any new ones I’d find and then promote the same good Clickbank product again to them.

This is a strategy I am re-looking at in 2020 and probably will be doing moving forward. Once I do this, I’ll write a followup case study on the process.

Make no mistake, this is an Amazon success story.

I may not have made much sales promoting Amazon products, but I did leverage this site and it’s products to promote better paying ones for my affiliate marketing efforts and that is why this is a case study linked directly to Amazon.

My particular strategy is a bit unique and so far, no one that I know has used it (and I honestly like that!) but you can make money with Amazon in more diverse ways and this is where I’d like to talk about 10 Amazon success stories that I wrote an article on which you can explore and see all the different ways you can make money with this network (and beyond it).