It’s been awhile since I’ve exposed a “copycat” scam site.

For a moment, I though after catching so many of them, I though I was making some headway in decreasing the number of these types of sites popping up and just as I was about to relax, whoosh, in comes EStore Builder. I want to tell you why I feel you should absolutely avoid this place as well as what you can actually trust.

EStore Builder in a nutshell:

It is a website which supposedly gives you a system from which to promote health and fitness supplements. From what I’ve seen you supposedly get a website, “just add links” to the page and then magically money comes in.

This is at least the impression I got from the sales pitch, but having reviewed so many websites like this before, I already know what I’m getting myself into and will recommend avoiding it.

Prior to spotting EStore Builder, I’ve reviewed a number of different work from home type websites (I believe at least 15) which in many cases seem almost identical. In nearly every single case the site’s almost look alike and promote themselves in the same way.

In addition, after awhile these sites cycle into a different site name, different name of a program, but still continue to be promoted as work from home opportunities. In other words, it’s a scam which keeps switching names but running the same scam all over again.

When I first stumbled onto EStore Builder, it was through a common website layout I have seen before and identified as being “Fake” work at home special report sites which promote programs like EStore Builder. Here is that page: 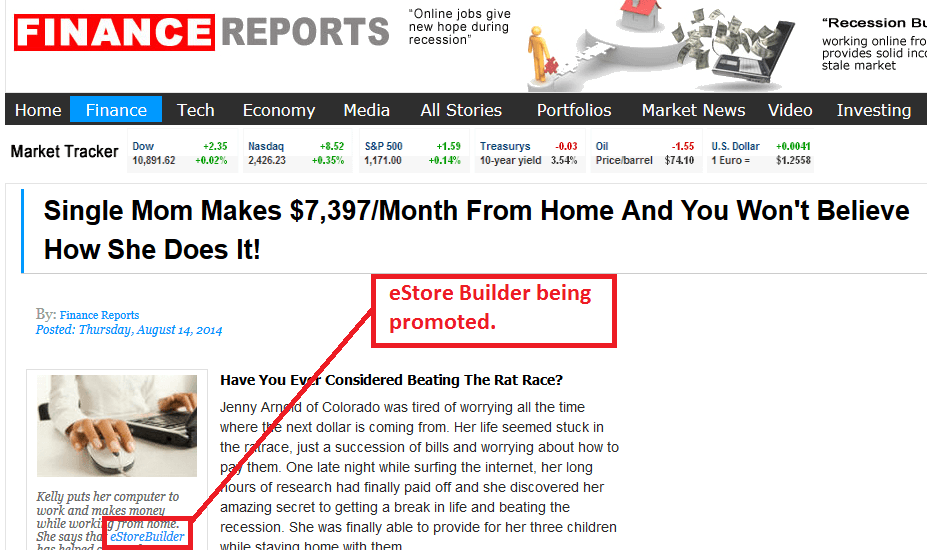 When I first saw this page, I knew immediately that eStore Builder was a scam. The other copycat sites I’ve reviewed almost always get promoted via the types of site layout you see above.

In the past, what you would get with copycat scam sites is them saying how easy it is to make money posting links. But this was pretty much it and there was no in-depth explanation on what’s actually going on.

With eStore Builder, you’re also told you’ll be posting links, but you also get a site which will basically create an “eStore” for you to sell health and fitness products.

As I said, this time around, there’s more of an explanation, but because of my previous runs ins with places that look like this and get promoted like this, I cannot and will not ever recommend it.

The truth about their claims:

Contrary to the “3 easy steps” they give you (here is a picture):

It is NOT that simple. This is all really done to make you think making money online is easy, but I’ve been in this business for many years and I can tell you nothing could be further from the truth.

The reality is that you’re making a website aiming to sell health & fitness products to an audience (niche) interested in these products. Posting links just means you put affiliate links on your site that if people click on and buy through, you get a commission.

To actually make this formula work, you need time, patience, visitors to your site and a lot of content in addition to other important guidance (see how to make money online here).

I do not believe you get ANY of those key components with eStore Builder rendering these 3 steps basically useless. In addition, if such a system is so simple to use, believe me, it wouldn’t be sold, it would be used to make tons of money by the creators.

While the theory itself is true, again the whole sales pitch is just there to well, sell you the product. Few programs are transparent about how they work nowadays and a key factor as well as red flag I look for in programs is transparency in their sales page.

If there is little/no transparency, that strikes me as being fishy which usually results in the program being a scam. Before you buy anything online involving making money, make sure the program is being upfront with you and by that I mean, it doesn’t give you the impression that making money online is easy, because it is not, although the concept does exist, but again not through programs like eStore Builder in my opinion.

0 out of 10 stars. The concept works, but eStore Builder is not a program I would ever recommend. I believe it’s a scam and I’ll be staying away from it. My only real recommendation for making honest money online is via this alternative (Wealthy Affiliate).

While the way it’s being sold is a little bit different than the copycat sites I’ve run into before, because it’s being promoted through one of the sites I know is fake (there are tons of other places which look exactly like it too) as well as the site’s overall design being nearly identical to the copycat scams I’ve reviewed before, not to mention the way this program is being sold to you, I am fairly certain this program is a scam.

Be very careful with sites like these and any program who claims you can make easy money. In my experience this is a trap. If you have had personal experience with this program, do let me know below!