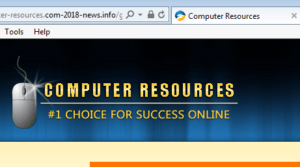 I have plenty of reasons for giving this program, this very low rating, but I’ll explain it in several points below because it’ll be confusing if I try to summarize it here without context. It’s a little bit complicated to understand how this scam works, but once you do, you’ll understand why I said it was shocking.

And it’s currently known as Computer Resources. The reason why is because for many months now, this program has been sold to people, but has been changing it’s name every few weeks or so. I’ve provided a list of those other ones below.

Now I’m not just saying this because I’m assuming this is what’s going on, I am saying all of this because I actually got caught by this scam, way back when it’s name was something else (but it did have the word computer in it).

Since that event took place, and I got a refund, I re-ran into it many times, and each time, the name has flipped (it’s happened at least 7 times now based on my count), but regardless, the same program I wasn’t happy with originally, is still the same program now known as Computer Resources and I know this because when I try to buy these programs, I am told basically the following:

Because I purchased the original program that it was called way back then, it didn’t matter that it switched names, my info was still recorded and I was not allowed to get it.

This is how I know that Computer Resources is the same bad program I once had (and refunded):

When I see that a purchase is not allowed to be made for obvious reasons such as that I already “have it”, not to mention the fact that if it was good, that I would have definitely remembered it (since there’s few good programs, it’s not hard to remember them all), this whole event tells me that Computer Resources is not good.

And trust me, the name changes it’s gone through are also a major sign that this is true…

If that wasn’t shocking enough, here’s some other stuff to note:

So my assumption about the this whole program being fake isn’t just an assumption, I actually have my own evidence to show this. And while I am glad that I didn’t have to spend money on the same thing, I still have to call this “new program” out for doing what it’s doing, and even if I try to look at any pros, there’s nothing good I can say unfortunately.

When I find the new name that this old program goes by, I end up looking through my site’s archives to see if I’d already written about it. I just see such similar names, so often that I end up getting lost, very often. But man, the guys behind this program are relentless. They can’t even come up with a new, ORIGINAL name.

Oh well, it just makes it easier for me to expose it…

In case you’re wondering if Ann Robert is real…

These types of sites are very sneaky in hiding the true creator and are notorious for using purchased images of models or whoever you currently see on their site. And if you don’t believe me by now, here’s more proof, straight from their own source (And I’ve underlined the most important parts to back up my point): 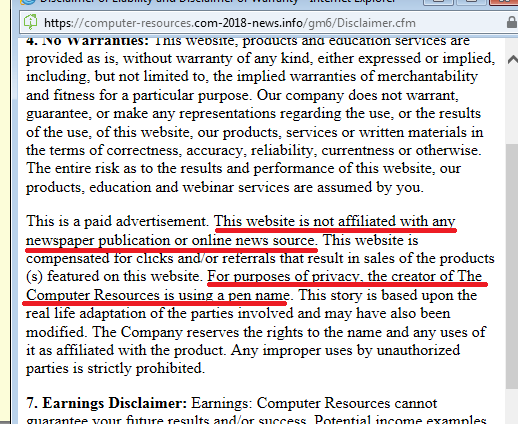 Then there’s also the mass fake websites that push these scams. They also partake in this scheme.

So there you go. What more can I say? You now have all the info I currently have regarding these programs and if you should try it or not. But here’s my personal opinion on this:

0 out of 10 stars. If a program says it’ll show you how to make money online, but does so much to hide the truth, how can you trust it?

You’re welcome to check out my site and view the archives. But you’re basically going to get the same type of expose in each review of the other programs I did, so there’s a little spoiler, but I am telling you this because if you want to save time and just get going with a legit program that helps you make money online, then this is the program you need:

Now unlike Computer Resources, I am not promising you quick money. In fact, I can tell you right away that in spite of the promises, Computer Resources would not help you make money quickly either because I’ve seen the training first hand and I can tell you right away that their job is to make it seem like it’s possible to do this fast, thereby convincing you to buy it. But I’m telling you, the reality is opposite of the promises.

But I am being up front with you guys and that’s because after personally running into scams like these for years, I know that what is required to make this work is a combination of a good training program and your effort mixed together.

What I am advising is indeed a good program.

No, actually it’s great (see my income stats), but it’s greatness cannot be achieved unless you put the effort into actually doing what it tells you. And that’s a major lesson I took from my history with this business and someone who went from making nothing and buying scams to someone who is actually making a living now through this business.

As for the other program, while I am growing quite tired of seeing the same “computer” scam, at least now that I’ve explained it to you guys, you can at least avoid it and at the same time try a FAR better program, the same one that’s worked for me. 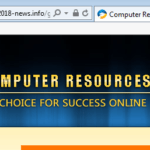 I believe Computer Resources is a scam and instead recommend this program. See how it works.
Click here to test drive Wealthy Affiliate risk free and get your bonuses (no CC required)