So on May 4th of this year, I wrote about a niche idea I had come up with. On that same day I purchased a domain to experiment on the site and had been working on it gradually ever since. And the niche was on mud runs.

A quick recap of this niche site:

About 2 months ago , I did a 3 month update on it and how well the SEO stats were considering how new and little content I had on it. We’re now about 5 months into this and I though I’d share what’s been happening.

Thus far, I’ve purchased a number of products to review and promote that I feel will benefit and be relevant to my niche. The estimated amount I’ve spent on all these products is about $1,500.

However every product purchased has been done so with the intention of being added as a review post on the site and to be promoted as well.

Normally, people short on money who start affiliate marketing should not be spending THESE kinds of amounts at first, but in my case, having other projects which fund this project makes it “smarter” for me to buy them.

Here is a chart with some of the products I’ve purchased so far, the price of each of them and the affiliate commission potential behind each. I’ve basically estimated what kind of rate I could get depending on the quantity of sales I can make. 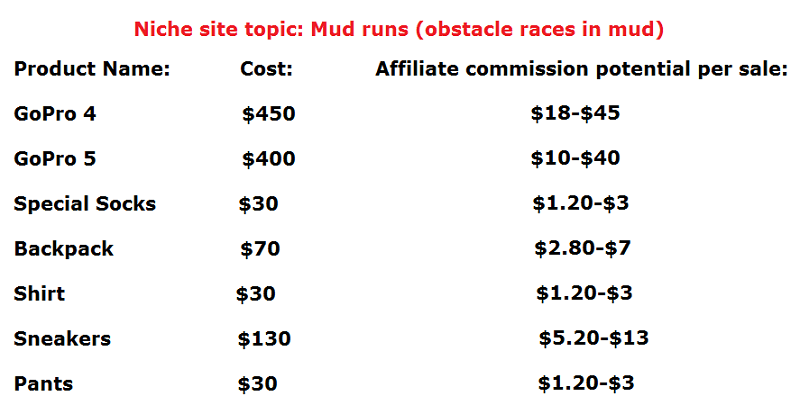 And yes, I did purchase all those supplies which makes up the $1,500 investment. Everything I purchased was done so with the intent to try, review and promote.

Should I have invested that much? Yes, because there has been growth to justify it:

Let’s begin with how we’re measuring the success of it because I want everyone to understand what’s going on. While I said there are no profits yet, this is NOT a bad thing.

Every single site that starts and focuses on growth through SEO takes TIME to reach that. That time can often be many months which coincides with my page’s time frame.

So the object is to get the traffic first, THEN analyze if and and how much that traffic buys. Only then will we be able to measure if all those investments were worth it. Generally speaking, the more traffic we can get = the more likely that investment will break even and go into profits.

This is the easiest way to explain it but in my case, we have different products with different affiliate commissions so until they start selling and I see which ones sell best, I won’t be able to make estimates.

Let’s look at the stats of this niche site (starting with month 3):

Obviously on the day I began this project, everything was at 0. 0 stats, 0 investments, and no traffic.

I wrote about 20 articles by that time. To be honest, this is VERY low. Generally if you work hard on any niche website, by 3 months, it should have at least 50 articles on it. But anyway, by that time, I was getting very little organic traffic.

However, I mentioned how surprised I was that I had so many keywords indexed by this short amount of a time. As long as I continued to write, publish more keyword focused articles, the many indexes I already had would increase and eventually we were going to hit 1st page rankings and THAT’S when the traffic would start pouring into the site.

I’m skipping this month because I just jumped to seeing the reports for the next month: 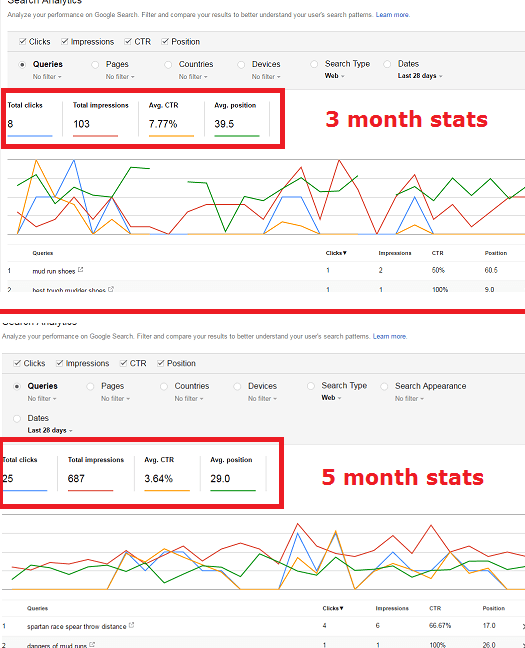 I added about 10+ more articles.

Now we have about 30, still not a lot considering I was still way behind what a hard worker would have put into this kind of project (it should have been about 100 articles by now, not 30), but in spite of that, here is what we’re seeing now:

These screenshots are taken from Google’s webmaster tools.

So let’s do a quick comparison of the numbers:

Notes: Very little change in organic rankings BUT many of my indexed pages moved up to page 2 on Google. When it hits page 1, then it’ll explode. This is not a major number to look at yet.

Notes: A nearly 5x improvement on how many different times my site popped up on Google. This is actually a very big number that tells that there’s indeed major progress happening.

Notes: Is this a bad drop? No, because the number of impressions above rose which makes it natural that the CTR would drop. However, it didn’t drop by a lot. Remember, the amount of times my site popped up for increased by 5 times! Having my click through drop a little bit like that is not bad.

What are positions in this case? It just means which page on Google my site shows up for when people type in the keywords. It was around 40, which meant 3rd/4th page results.

Notes: Now we’re moving into end of 2nd page, mainly 3rd page results. In other words are moving higher and higher with each month. It’s only a matter of time and more content before these positions hit 10 and up.

Notes: What are these? Well queries just means keywords my site will show up for. Since there’s now 78, it means more and more of my content is being seen on Google. This ever growing exposure is what will eventually lead to the massive traffic increase.

How much more is hard to tell right now, but even with conservative estimates I’ve made based on researching this niche, I believe I can get anywhere from 20,000-50,000 visitors or more a month.

Summarizing the 5 month stats of this niche site:

Based on what Google has shown me, there has been an increase in every single aspect of the site’s authority, traffic and appearances on Google itself with the exception of the CTR (Amount of clicks), but that’s been diluted because impressions multiplied by SO much.

Otherwise, the big picture is that this project IS working and growing. Obviously, I still have tons of work left, mainly in the content aspect, but despite me not really having that many posts yet and still having so many impressions and such an incredible growth is demonstrating that this niche topic is indeed worth pursuing!

Why is that I haven’t worked on this project as much as I should have?

There have been 2 obstacles in the way of me really putting in the hard work on this project (specific details on it):

1) I have been busy (and lazy, I admit it!) with my other online marketing projects.

2) I haven’t been able to come up with too much new content, but in less than a week, I’m going to be testing a lot of the gear I purchased and that will be able to give me enough experience to write a lot more new content. Generally a GREAT review comes with someone who actually experiences what they’re reviewing (more tips on writing good product reviews).

I estimate with this upcoming test, I’ll have at least 10-20 new article ideas show up. That extra content is going is in my opinion going to help the site crack into the 1st page rankings like I’ve seen with and start to see some great daily traffic.

I believe around that time (it could be another 2 months), I’ll start to see if the things I purchased are selling because there will be people looking at those pages everyday.

The more I continue to write and work on this project, the more I’ll be able to make the sales. I have little doubt that I’ll surpass the $1,500 and start seeing profits from this project hit in the beginning of 2017, provided I actually continue to work on it consistently…

4 thoughts on “5 Month Niche Site Update. How Much my Site Grew.”